This year’s crop of potential Best Picture contenders will have a hard time living up to last year’s nominees at the box office.

While there’s almost no chance the class of 2013 will live up to its predecessor, there are bright spots: The Weinstein Company’s awards hopeful “Lee Daniels’ The Butler” is at $110 million domestically, while “Gravity,” the George Clooney-Sandra Bullock sci-fi thriller that debuts Friday, is projected to open north 0f $35 million for Warner Bros. — so $100 million is a safe bet.

Beyond that, there are no sure things.

The Martin Scorsese thriller “The Wolf of Wall Street,” which stars Leonardo DiCaprio and Matthew McConaughey, could reach those heights; but it won’t make its Nov. 15 release for Paramount, and the question at this point is whether it’ll be a December release or move into 2014.

Beyond those movies, it’s hard to find films that are solid bets to earn a nomination and break out at the box office. It’s early in the process, so assessing awards potential and box office prospects is tricky, and few thought as this point last year that the 2013 nominees were going to play as strongly as they did.

“It’s not a knock on this year’s films, it just shows how incredible last year was,” Exhibitor Relations vice-president and senior analyst Jeff Bock said. “It may be quite a while until we see anything like that again, and this looks like a more typical year, when you have the split between movie audiences and the pundits — unless ‘Iron Man 3’ gets a nom.”

He was kidding, of course. But if any movies are going to crash both the box office and Oscar parties, several studio films featuring A-list talent would seem to have the best shots.

Tom Hanks stars in Sony’s fact-based Somali pirate tale “Captain Phillips,” which is directed by Paul Greengrass (“The Bourne Identity). The critics love it and it’s the sort of heroic tale that often appeals to Oscar voters, but opening one week after “Gravity” isn’t going to help it at the box office. 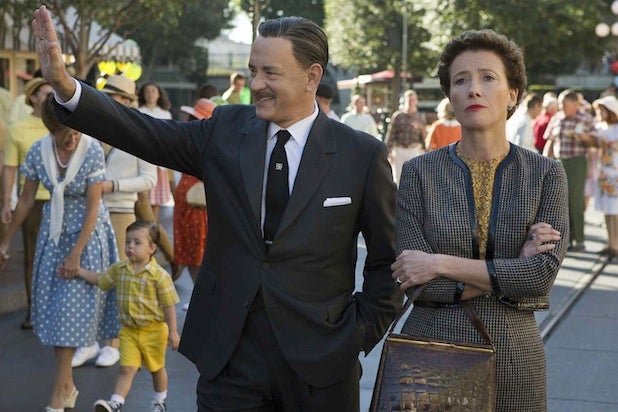 Hanks will play Walt Disney and co-star with Emma Thompson in Disney’s “Saving Mr. Banks,” the story of the making of “Mary Poppins.” Hanks’ presence and the popularity of the classic family tale will make it a wild card when it opens on Dec. 13, but while films about Hollywood often resonate with awards voters, it’s not often they click with moviegoers on a major scale. (One other note: the early word is that just about everybody who’s seen it cries; if it’s a really a world-class tear-jerker, that will help with the Academy.)

The Weinstein Company’s “August: Osage County” carries  a lot of star power into its Christmas Day bow, and while its performances could get some awards traction, it doesn’t sound like a recipe for a box-office breakout.

George Clooney writes, directs and stars in Sony’s “Monuments Men,” a period drama about a group of art historians and museum curators uniting to recover artworks of stolen by Nazis. It will face a challenge opening on Dec. 18, days before “Anchorman: The Legend Continues” and the kids film “Walking With Dinosaurs,” and pundits have downplayed the film’s awards chances by suggesting that it takes an “Ocean’s Eleven”-style approach. If that’s true, it might be more commercial than the subject matter indicates.

Ben Stiller can be a box office force in a comedy — and Fox’s take on “The Secret Life of Walter Mitty” will likely connect with moviegoers when it debuts on Christmas Day. Whether it’s seen as having Oscar-level consequence or charm is a different question, but word of mouth is very strong; we’ll know more Saturday when it debuts at the New York Film Festival and screens for a small group in L.A.

Tough subject matter could limit the box office for Focus Features’ “Dallas Buyers Club” when it opens on Nov. 1 Matthew McConaughey stars in the fact-based tale of Texas electrician Ron Woodroof and his battle with the medical establishment after being diagnosed as HIV-positive in 1986. Fox Searchlight’s “12 Years a Slave,” starring Chiwetel Ejiofor, came out of the Toronto Film Festival with a ton of awards buzz. But director Steve McQueen’s historical drama about slavery may be too harsh for mainstream audiences to embrace broadly. 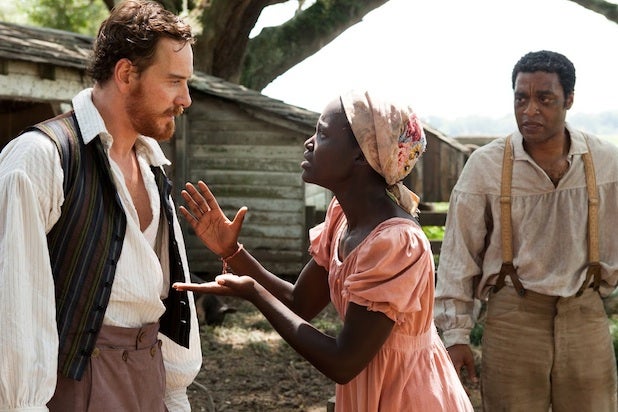 “12 Years a Slave” has the potential to be seen as a landmark movie that every serious moviegoer has to see – as say, “Schindler’s List” was back in 1993 – but whether there are enough serious moviegoers to get a movie to $100 million is another question. It opens Oct. 18

It’s a different dynamic for some other films considered potential awards bait.

CBS Films’ ‘Inside Llewyn Davis” (Dec. 6), the Coen brothers’ tragicomic story of the Greenwich Village folk scene, and “Nebraska” (Nov. 15), director Alexander Payne’s look at the reunion of a son and his booze-addled pop, are both smaller, intimate films. They’ll likely both find their box office niche, but could be hard-pressed to play much beyond that.

Also read: Why ‘Beasts of the Southern Wild’ Is the Box Office Winner in Oscar’s Best-Picture Race

Likely to be in that same boat of small movies that could be in contention but probably won’t be big at the box office will be Lionsgate’s “All is Lost,’ which features Robert Redford alone at sea for 90 minutes. Several indie films are already out – the Weinstein Company’s ‘Fruitvale Station,” Woody Allen’s “Blue Jasmine,” Fox Searchlight’s “Enough Said” and Richard Linklater’s “Before Midnight” – that have hopes for nominations but won’t come close to $100 million, though Harvey Weinstein recently floated the idea of a re-release for “Fruitvale.”