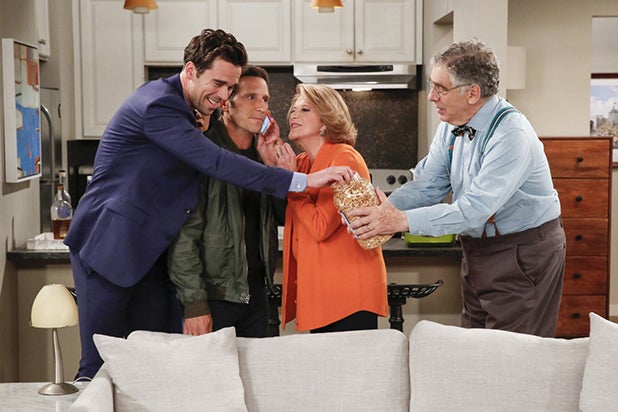 “Knock, knock.” “Who’s there?” “Not that many people.” This is the conversation we imagine went on at the door of fictional CBS apartment “9JKL” last night.

The Mark Feuerstein sitcom suffered a 43 percent drop in adults 18-49 on Monday without “The Big Bang Theory” as its massive lead-in. Instead, “9JKL” aired after an original “Kevin Can Wait.”

That’s not quite the same setup for success.

That huge 8 o’clock dropoff led to “9JKL” at 8:30 p.m. slipping from a 1.4 and 7.2 million viewers to a 0.8 and 5.1 million — declines of 43 percent and 29 percent, respectively. All told, CBS slunk from third to fourth last night in the advertising industry’s favorite age-range for targeting primetime commercials.

With “Thursday Night Football” on its way from CBS to NBC, “BBT” is making its annual move to Thursdays at 8/7c. Beginning this week, “Big Bang Theory” will be paired with its spinoff, “Young Sheldon.”