You can add the Academy of Motion Picture Arts and Sciences to the long list of organizations taking an interest in 3D.

On the heels of a couple of 3D-related panels at the Produced By Conference and an upcoming 3D Summit next week in Culver City, the Academy has announced a series of three evening programs devoted to the craft and technique of 3D filmmaking.

Entitled “Getting Perspective III: Exploring the Craft of 3D Movie Technology.” the programs will take place on three consecutive Tuesday nights in June and July.  The first program will cover “Virtual 3D” (animation, motion-capture and conversion) on June 22, followed by “Photographed 3D” (both live-action and stop-motion) on June 29. The program will culminate in a screening of the concert film “U2 3D" (below). 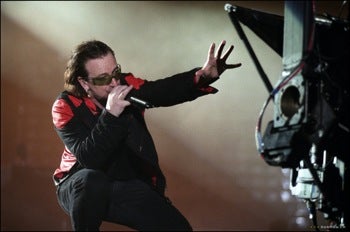 The first two programs will feature guests who worked on such films as "Coraline," "Monsters vs. Aliens," "Journey to the Center of the Earth," "G-Force" and "X-Games 3D: The Movie."  The last will include the director, editor, and director of 3D photography on the U2 film.

The first two events will be held in the Linwood Dunn Theater at the Academy’s Pickford Center for Motion Picture Study in Hollywood; the U2 screening will take place at the Samuel Goldwyn Theater in the Academy’s Beverly Hills headquarters.  All will be hosted by Academy member Rob Engle, a senior stereographer and 3D visual effects supervisor at Sony Imageworks.

Tickets are available to the public for $5, and to students and Academy members for $3. More information is available at the Academy website.

The AMPAS event will follow the “3DNext Summit,” which will take place on June 14 at the Radisson Westside in Culver City. The one-day event, whose sponsors include the Imax Corporation, BluFocus and Snader & Associates, will assemble an array of executives and filmmakers from the likes of Sony, Panasonic, Fox Sports, DirecTV, Oculus 3D and IMAX.

The agenda is available at www.3d-next.com.