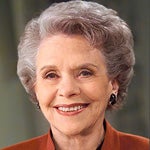 Legendary "As the World Turns" actress Helen Wagner has died. She played mild-mannered Nancy Hughes on the CBS soap opera for more than a half-century. She was 91.

Wagner spoke the first words on "As the World Turns" when the show premiered on April 2, 1956, and held the Guinness World Record for playing the same role on television for the longest amount of time.

Wagner was born in Lubbock, Texas. The production company hasn’t said where she died or what was the cause of her death.

Read more from the Associated Press.