CARLSBAD, Calif. — The AllThingsD conference, now in its seventh year, has earned a reputation for bringing the top minds, trends, entrepreneurs and ideas together for a couple of sun-kissed days north of San Diego.

That’s the myth. Here’s the reality: Um, they really do. (Except there’s no sun to speak of at this time of year.) 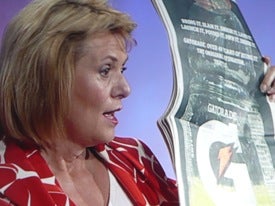 I nearly tripped over Martha Stewart as I went to take a picture of Carol Bartz, the CEO of Yahoo, being interviewed on stage by Kara Swisher. Rupert Murdoch sat in the front row (OK, it is his conference, run by Swisher and Walt Mossberg), while Bartz wagged a Wall Street Journal (see left) at him and asked what it cost for an ad on the back page.

The whole thing has the homey feel of intimates who know each another well and who have lived through the battles of the digital frontier together.

Which means that while Bartz was on the hot seat today, once upon a time Yahoo strode the World Wide Web like an invincible titan. You can tell that one to Owen Van Natta, the new CEO of MySpace, who is tasked with resurrecting a once-invincible social media network.

Many here have lived the basement-to-billionaire journey that marks this corner of American industry. Many others here are investors quietly looking to invest in the next basement-dweller who looks poised to lead them to billions.

The digital cognoscenti share the knowledge that some product, some technology or some uber-geek ever lurks in the wings, waiting to relegate them to the trashbin of Internet history.

(I met one — Zvi Schreiber of Modiin in Israel, who explained to me over coffee the incredible new technology of his company, G.ho.st, in which "cloud servers" host the computer surfer’s entire desktop … for free. His business card is plastic laminate and proclaims: “PhD” and “CEO.” I think his company name is too confusing, but nobody asked me, and I’m no doctor.)

But that’s partly why folks are here — to find out what’s around the corner, what’s waiting to render them obsolete or start them on a downward trend, or a static one, which is the same thing.

The top dogs at Twitter were here on Tuesday, asserting that they would never sell their company.

Bartz scoffed at that on Wednesday. “Never is a long time,” she said.

Lots of new technologies are introduced on stage, which has a roaming camera that is projected onto large screens, so it looks like a cooking show, but with tech.

The new Flip video got a rollout by CEO Jon Kaplan — he just sold his company to Cisco for $590 million — in which he showed people how to create a "Flip" channel, where they can easily upload videos and share them, without being tethered to YouTube.

The afternoon would bring the latest in touch technology from Immersion. Standing in line at lunch, one of its executives explained that the new touch technology allows you to know the mood of the person texting you. God forbid you might miss that part of the texting experience.

This is a world very far from Hollywood, culturally speaking, even though a number of Hollywood folks were here. But it’s the world of Bill Gates for the most part — khakis and button-down shirts — and not a Gucci loafer in sight, even though Gates wasn’t here, at least not this year.