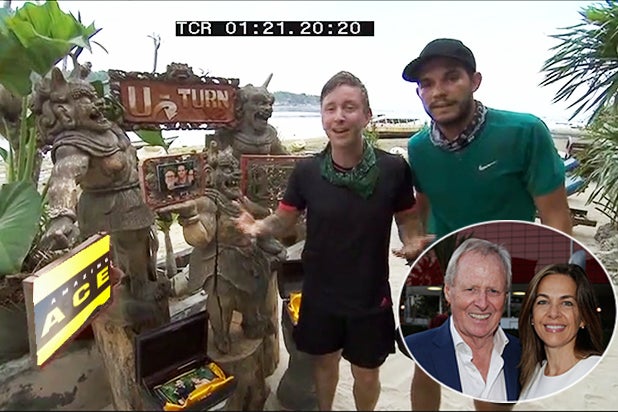 (Spoiler Alert: Please do not read on if you have not yet watched Friday’s episode of  “The Amazing Race” episode in Indonesia)

And as the season speeds along at a rapid pace, creators and executive producers Elise Doganieri (@EliseDoganieri) answers TheWrap’s questions about the most recent episode.

TheWrap: We just saw a coordinated smart plan by the teams to minimize the U-Turn and focus the pain on one team at the back, Brodie and Kurt. This is something we’ve seen this group do all season — how surprised were you to see such coordination between teams and smart strategic thinking?
Elise Doganieri: The big surprise is that Tyler and Korey and Burnie and Ashley did not discuss this plan before it happened. It all just came together on the spot. Burnie and Ashley are probably our most strategic team this season, and playing the U-Turn to block Brodie and Kurt from playing theirs is a brilliant move. We love seeing that kind of game play!

Everyone chose the coconut side of the Detour. With a U-Turn ahead, how strong is the incentive for teams to all pick the same side and just follow suit so they can keep each other in sight?
In this case, teams all independently chose the coconut side of the detour. Teams weren’t aware what the others were choosing. Obviously it turned out to be a huge advantage for Tyler and Korey to be able to see all the teams and know how far ahead of them they were. Had Brodie and Kurt initially chosen the seaweed, we might be have had a different outcome.

We love seeing all the teams stick around after checking in. We’ve seen it in the past few episodes and get to see the leaders watch and welcome the rest of the pack instead of disappearing off camera. Can you please keep that up?
We love group Pit Stop reality. But those group moments happen because teams are finishing right on top of one another. We’ve had some very close races this season. This is definitely one of the most competitive casts we’ve ever had.

What are the warm-up stretches for jumping off a 40-foot cliff, and could you do it without that Ken doll warming you up?
The warm-up stretches are absolutely necessary. It’s very easy to injure yourself on a jump like that. The stretches prepare your body for the impact. Our safety instructor does do that for a living, but he also happens to be a celebrity Aussie lifeguard. It’s always entertaining when one of our experts/safety instructors gets a reaction out of the cast. Stay tuned, it might just happen again this season.