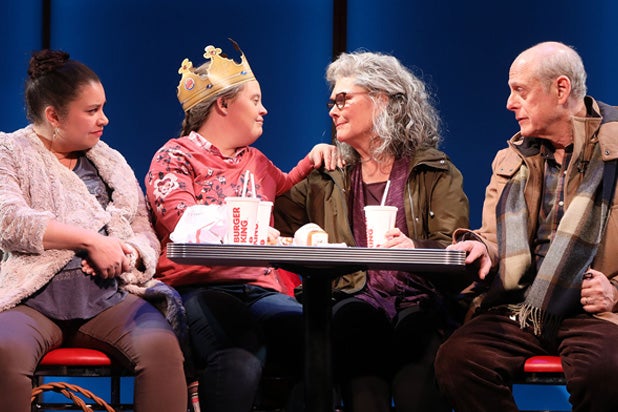 Clifton Webb grieved so much over the death of his 90-year-old mother, Mabelle, that Noel Coward was forced to comment: “It must be terrible to be orphaned at 71.”

Coward’s spot-on quip about the epicene star of “Laura” and “Sitting Pretty” also applies to the harried brother-and-sister team in Lindsey Ferrentino’s new play, “Amy and the Orphans,” which opened Thursday at the Roundabout’s Laura Pels Theatre.

Maggie and Jacob are closer to 60 when their father passes away, but they are quick to call themselves “orphans,” and as played by Debra Monk and Mark Blum they are also hilarious in their mutual grief and angst. Monk and Blum mesh so well in their flamboyant display of Maggie and Jacob’s many shared neuroses that you can almost overlook Ferrentino’s easy laugh lines as she pokes fun at such obvious targets as Long Island, Stove Top Stuffing, and Jews who become Jesus freaks. In their opening scenes together, Monk and Blum serve up a meal of Broadway comfort food, the variety of which we almost never get anymore.

Interspersed with their moments together are scenes featuring the younger actors Diane Davis and Josh McDermitt, who play a married couple on the verge of divorce. They deliver fine performances, but aren’t nearly as funny as Blum and Monk. You may wonder why Ferrentino hasn’t given them as many zingers. You definitely will be asking yourself a much bigger question: What are their characters doing in this comedy?

Amid all these questions, we finally meet the Amy of the title, Jacob and Maggie’s younger sister, who has Down syndrome and lives in a care center. Jamie Brewer (“American Horror Story”), an actress with Down syndrome, makes theater history with her astute performance as Amy — and not just for the obvious reason.

Much more significant is that she lifts the play from its sitcom comfort level by turning Amy into the edgiest character on stage. Employing a clipped and no-nonsense delivery, Brewer’s Amy knows precisely what she wants (red balloons and red Skittles, and no other color will do) and how to get it without ever turning abrasive. (Interestingly, Ferrentino has not specified a gender for the character and the title becomes “Andy and the Orphans” when understudy Edward Barbanell performs the role.)

Amy’s caretaker Kathy is a very outspoken, very pregnant Italian woman, and as played in extremely loud, over-the-top form by Vanessa Aspillaga, the character could be spun off tomorrow as the centerpiece of a network TV series.

Except for those odd scenes with Davis and McDermitt, director Scott Ellis keeps things bubbling along as if “Amy and the Orphans” was a vintage Neil Simon comedy from the 1960s. That very major key is as intentional as it is inspired, and not just because Ferrentino’s play rolls along so effortlessly. The playwright has a bomb up her sleeve, and when she decides to detonate it, much deeper levels of fear and apprehension are immediately revealed.

Brewer grabs our interest by never begging for our sympathy. And Ferrentino achieves something equally remarkable. She has written a play about abuse in which there are only survivors and no obvious villains.