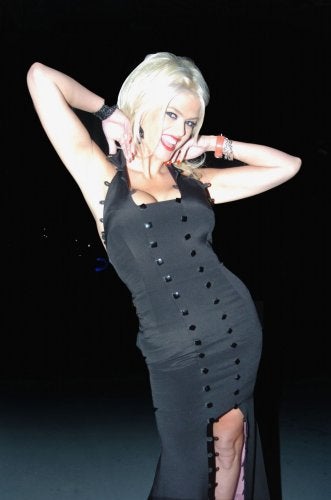 The end of the Anna Nicole Smith hearing came more with a whimper than a bang.

For three weeks, testimony and arguments had raged in Department 104 over whether or not Smith’s lawyer-companion, her doctor and her psychiatrist should stand trial on charges the three conspired to illegally keep the model-actress – a known addict — pumped up on a steady diet of dangerous prescription drugs that included Methadone, Dilaudid and Demerol.

At the heart of the county’s case were accusations that all three collaborated in the writing and filling of simultaneous prescriptions for Smith under several aliases. The hearing was as hard-fought among attorneys and prosecutors as a full-blown trial, and Judge Robert Perry continually reminded them that the proceedings were “only a hearing.”

Shortly before 1 p.m., however, Perry threw those proceedings onto more serious ground by finding there was enough evidence to warrant a trial for Howard K. Stern (who is charged with 11 felony counts), Dr. Sandeep Kapoor (six counts) and Dr. Khristine Eroshevich (six counts). The three defendants are not charged with responsibility for Smith’s 2007 drug-overdose death.

The stagecraft for preliminary hearings is far more informal than a trial’s, and defense attorneys Steven Sadow, Adam Braun and Ellyn Garofalo were occasionally interrupted by the judge or prosecutors Sean Carney and Renee Rose while presenting their final arguments.

By 12:30 p.m., when Rose stood to conclude the prosecution’s case, Judge Perry seemed to have his mind made up as he asked her to be brief — so that the court stenographer could attend a 1 p.m. appointment. Throughout the past three weeks Perry has appeared irritated by Rose’s noisy examination of witnesses and eagerness to stray off the narrow line of inquiry he’d prescribed for the attorneys. The white-haired Perry often interrupted Rose, admonishing her to get to the point, or rolled his eyes at her excited responses to his instructions, as though Rose’s mere presence was a form of senior abuse.

“I have heard the evidence,” Perry tartly reminded the deputy D.A. during her closing argument. “Why don’t you try to wrap up, Miss Rose.” Moments later he cut her off once and for all.

“I’ll be ruling in your favor,” Judge Perry said. “Does the defense have anything else they’d like to say?”

With that casual, offhand remark, Perry had announced his decision. For a moment the defense team was silent before numbly engaging in the purely administrative business of arranging a meeting with the new trial’s presiding judge, David Wesley, late of the Anand Jon Alexander trial. That first date will be December 11.

Judge Perry reminded the lawyers that the hearing had been held solely to determine if probable cause existed to make the defendants stand trial – evidence that could be “gross and unrefined” but, nevertheless, enough to make a reasonable person suspicious of a defendant’s guilt. Stern had yawned earlier when hearing this definition, but with the announcement of Perry’s decision, he forlornly dropped his head. If convicted on all charges, Stern, like Drs. Kapoor and Eroshevich, could face more than five years in prison.