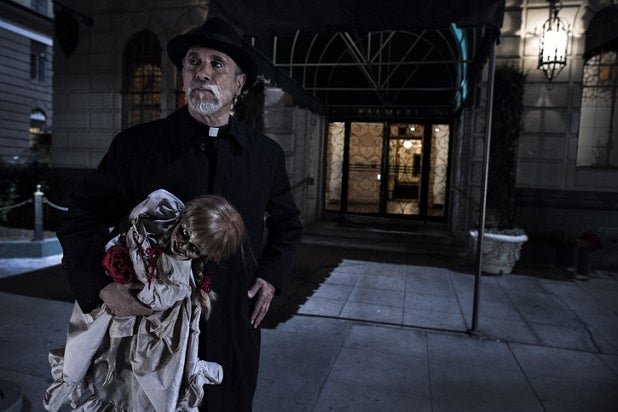 That ups the foreign total for the demon doll saga — which was made for $6.5 million — to $92 million and its worldwide haul, when you factor in North America, to more than $166 million.

The international total keeps it on pace with “The Conjuring,” last year’s breakout horror hit from which “Annabelle” was spun. The leading overseas markets have been Brazil ($7.9 million), the U.K. ($7.4 million) and France ($7 million), where it held the top spot for a second week.

The top-grossing film overseas this weekend was “Guardians of the Galaxy,” which became the third-highest grossing Marvel movie ever at the worldwide box office after adding another $23.1 million.

Disney’s superhero space romp crossed $400 million at the foreign box office this weekend, and has now taken in $732.6 million globally. That pushes it past “Captain America: The Winter Soldier,” and leaving it behind only “The Avengers” ($1.5 billion) and “Iron Man 3” ($1.2 billion).

“Guardians” had a strong second week in China, which is now its top overseas territory with $69 million, followed by the U.K. ($47 million) and Russia ($38 million). It has taken in $328 million from the U.S. and Canada.

“Dracula Untold” opened at No. 1 in nine of the new markets, and raised its international total to $95.7 million after two weeks for Universal. The reboot of the studio’s classic monster tale starring Luke Evans has brought in $136 million globally.

“Gone Girl” is showing the same staying power abroad that it has in the U.S. The David Fincher-Ben Affleck murder mystery added $20.2 million this weekend, with strong second weeks in the U.K. ($3.9 million), Australia ($2.8 million) and Russia ($1.3 million). It’s foreign total is now $94.7 million with releases in South Korea, Italy, and Japan still to come for Fox.

The studio’s “The Maze Runner” rung up $17.1 million this weekend and has now brought in $161 million from overseas and more than $252 million worldwide.

Foreign audiences are still shelling out for “Teenage Mutant Ninja Turtles,” too. The Michael Bay-produced reboot of the pizza-eating reptile tale added another $20 million from 33 foreign markets this weekend. It’s up to $185 million internationally, and $375 million worldwide, with China and Japan still ahead.