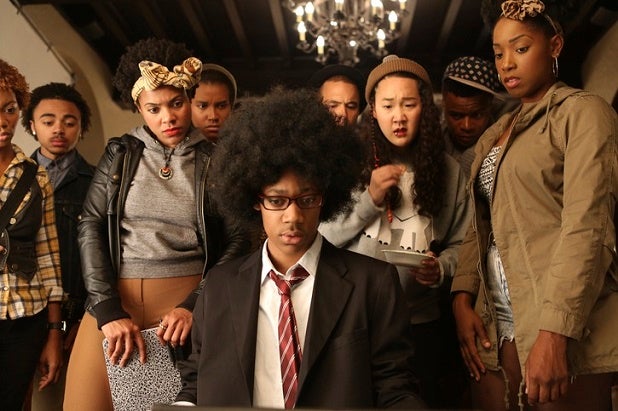 Where better to market a movie like “Dear White People,” a provocative look at racial hypocrisy on a college campus, than on college campuses?

Roadside Attractions and Lionsgate did just that with writer-director Justin Simien‘s satire that takes on race, sex, privilege and power, and it connected in its limited debut this weekend. “Dear White People” opened on 11 screens in New York, Los Angeles, Washington DC and Atlanta and took in an estimated $344,136, for a strong per-screen average of $31,285.

In the film, “Dear White People” is the name of a series of radio broadcasts and viral Internet videos put out by one of its main characters, a college student named Samantha White (Tessa Thompson). They point out the blind spots displayed by many well-intentioned Caucasians in their dealings with African-Americans.

Watch the video: ‘Dear White People’ Trailer Takes Films Like ‘The Help’ and ‘The Blind Side’ to Task

“Dear white people, the minimum number of black friends needed to not seem racist, has just been raised to two,” she warns in one spot. “Sorry, but your weed man, Tyrone, does not count.”

Roadside took a cue from that in marketing the film, relying very heavily on social media, viral video and targeting college students to sell it.

“We created an event with ‘Dear White People’ via continuous social media engagement, complimented with traditional PR and college outreach that attracted a young and diverse audience to theaters,” said Howard Cohen, co-president with Eric D’Arbeloff at Roadside.

As a result, the film played younger than the typical specialty film. Exit polls showed 77 percent of the audience was in the 21-39 age range, with 29 percent between the ages of 21 to 24.

Also read: BET’s ‘The Game’ Will End After Nine Seasons

“Our teaser trailer dropped via the film’s YouTube page, generating 1 million hits in a couple days,” Cohen said, “and we grew the Facebook community from 10,000 to 300,000 with exclusive content created by the film’s writer-director.”

It didn’t hurt that the film is a huge hit with critics, and is at 97 percent positive on Rotten Tomatoes. Among those was a rave review by the NY Times’ A.O. Scott, who said that Simien “serves harsh medicine with remarkable charm and good humor … Everyone should see this movie, and everyone will see it a little differently.”

Also helping was a multi-city PR tour, with university screenings at Harvard and historically black colleges.

Simien and the cast, which includes Tyler James Williams (“Everybody Hates Chris”), Teyonah Parris, Brandon Bell, Kyle Gallner and Dennis Haysbert, did stops on “The Colbert Report,” BET’s “106 & Park” and MSNBC’s “The Last Word with Lawrence O’Donnell” as part of a full-court promo press.

“Dear White People” will expand into 350 screens in the top 75 markets this week, Cohen said.