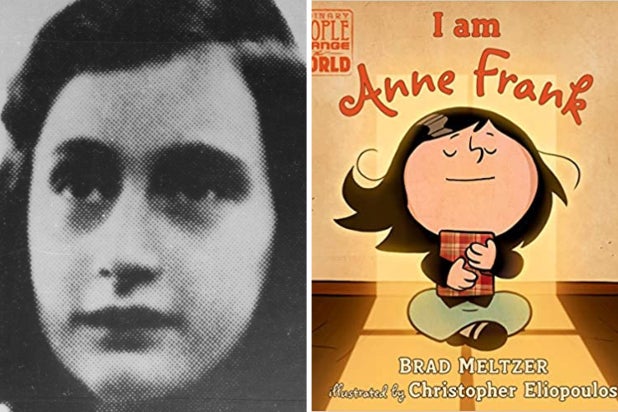 The story of Anne Frank, first shared in 1952 through the publication of “The Diary of Anne Frank,” is so well-known and ingrained in Western culture that we sometimes take it for granted and assume that everyone knows the importance of her story and her message.

Yet a recent study revealed that two-thirds of young adults in the U.S. were unaware that such a large magnitude of Jews were killed in the Holocaust and that anti-immigrant sentiment is widespread around the world today.

Brad Meltzer’s just-released children’s book, “I Am Anne Frank,” aims to re-educate the world about the German-Dutch teenager who kept a diary while hiding from the Nazis in Holland. “This is not a history book,” the best-selling author told me. “It’s a book about character.”

Meltzer felt the time was right for a retelling of Frank’s story as part of his “Ordinary People Change the World” series. It is a collection that includes luminaries like Dr. Martin Luther King, Jr, Sonia Sotomayor and Abraham Lincoln. “I Am Anne Frank” feels the most personal to Meltzer, who is himself Jewish.

“As you may know, one of the things in the United States taking place now is a big battle over how we deal with immigrants. It was very important to put a line in there that ‘We tried to leave the Netherlands and go to the United States but we couldn’t.’ They were like ‘You just can’t come,'” he explained.

As a Jewish woman who grew up in Israel, one of the only places to welcome Holocaust survivors, and someone who went on an educational trip to the Anne Frank House in Holland as a teenager, I understand the importance of tolerance and understanding.

Meltzer, a history buff and the former host of History Channel’s “Decoded,” wanted to make sure the book was as accurate as possible, down to the breed of Anne’s cat and the exact red pattern of her diary. Initially, the book had a character erroneously dressed as a Nazi rather than a police officer denying the Frank family entry into certain locales. But it was corrected through consultation with the Holocaust Museum and the Anne Frank Center for Mutual Respect in Atlanta.

In other stories about Anne Frank, Meltzer realized that the emphasis was on her life in hiding. “The attic made her famous but it didn’t make her human,” he explained.

“But if you want to see the human side of her,” Meltzer says, “focus on her life before the attic. I read her diary and said wait a minute she loved the same things my kids love… she loved to play hide and seek and tag. She loved going ice skating, she would take her sister’s skates. She loved to get autographs and knew all of the celebrities’ names. When my daughter hears that, she is like ‘Wait, Anne Frank is just like me.'”

“I Am Anne Frank” emphasizes the famous chestnut tree Anne stared at often. That aging tree was knocked down in a storm in 2010. Before that happened, the chestnut seeds were planted around the world, creating new chestnut trees including the memorial dedicated to the Holocaust located in Jerusalem, Yad Vashem.

Meltzer finds the existence of new chestnut trees around the world a fitting tribute to the optimistic and hopeful spirit of the young girl, who wrote, “as long as this exists, and it certainly always will, I know that then there will always be a comfort for every sorrow, whatever the circumstances may be.”

“Our secret weapon is our artist, Chris (Eliopolous), who makes these characters so adorable that kids cannot wait to learn about them. The other secret weapon is the need in our culture today. We are a society starving for heroes. Look around, adults and kids alike are anxious. In my opinion, Anne Frank’s story is more necessary than ever,” he added.

As someone who works with children, I am confident that there are so many life lessons in this small simple book for kids of all faiths. Meltzer says the main lesson the story of Anne Frank provides is that “you can always find light in the darkest places.”

“I Am Anne Frank” concludes not with Frank’s capture by the Nazis in 1944 or her death in the Bergen-Belsen concentration camp a year later. Those events are not depicted graphically in the body of the book, they are only alluded to in a historical timeline in a post-script to the book. Instead, the book ends with an exhortation for people to help others. “Be the one who does the right thing. When you see something that’s unfair, do not be silent.”

BIO Ayelet Raymond
Ayelet Raymond is a film and musical director who lives in New York City. She collaborated with young Broadway performers to create the American children’s television show My Hebrewland. She is the creative force behind the Kosher Barbie character and social media personality.