A woman has accused Ansel Elgort, star of Disney’s upcoming Steven Spielberg movie “West Side Story,” of sexually assaulting her in 2014 when she was 17.

The woman named Gabby, who did not reveal her last name, tweeted a statement on Friday and made an unverified claim that the actor, now 26, sexually assaulted her when she was a teenager. Gabby described sobbing and being in pain and said, “I didn’t want to do it the only words that came out of his mouth were ‘we need to break you in.'”

Gabby said that in 2014, she direct messaged Elgort letting him know that it would soon be her 17th birthday and said Elgort then gave her his private Snapchat account and asked for nude photos. She also posted a photo of what appeared to be her sitting with Elgort as well as what she said was a screenshot of their direct message exchange in which he provided his private Snapchat account. Gabby said she was coming forward now “so I can finally heal.”

The woman added, “Years later, I have PTSD, I have panic attacks I go to therapy.”

Elgort on Saturday evening in an Instagram post denied Gabby’s accusations that he has “never and would never assault anyone.” The “West Side Story” actor said of the incident that his relationship with the woman took place in New York when he was 20 and that the relationship was “brief, legal and an entirely consensual relationship.”

“I was distressed to see the social media posts about me that have been circulating in the past 24 hours,” Elgort said. “I cannot claim to understand Gabby’s feelings, but her description of events is simply not what happened. I have never and would never assault anyone.”

TheWrap was unable to reach Gabby to corroborate her story. Her Twitter account has been in existence since 2014. 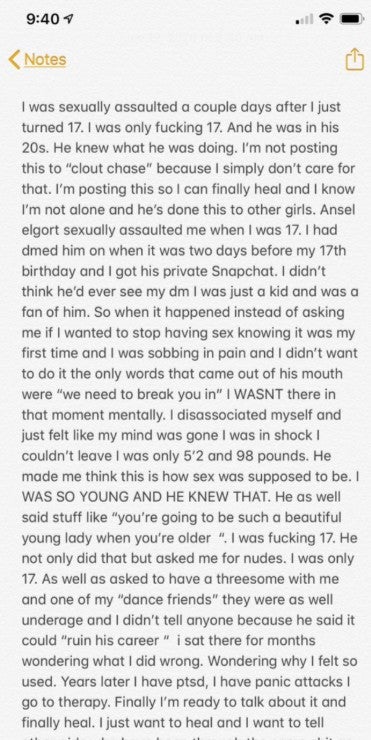 UPDATE: Since this story has been published, the woman — who received both praise and criticism for coming forward — has  deleted her social media accounts.

“West Side Story,” in which Elgort plays the starring role of Tony and Rachel Zegler as Maria, is one of Disney’s major planned releases for the holiday season and is slated for a Dec. 18 wide release. Representatives for Disney have not responded to TheWrap’s multiple requests for comment. 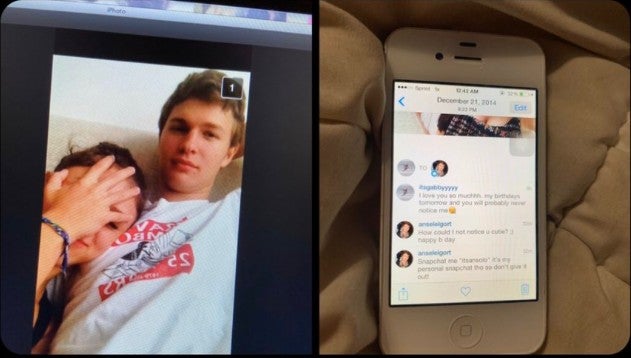 “He made me think this is how sex was supposed to be. I WAS SO YOUNG AND HE KNEW THAT. He as well said stuff like, ‘you’re going to be such a beautiful young lady when you’re older.” I was f—ing 17,” she said in her statement.

Elgort most recently starred in “The Goldfinch” and is meant to appear in the series “Tokyo Vice” for HBO Max and the 20th Century Studios and Disney film from Steven Spielberg “West Side Story,” scheduled to be released in December. HBO Max declined to comment.