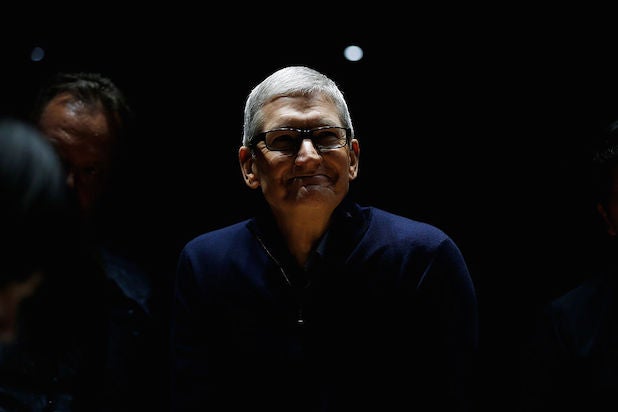 Just days after Apple CEO Tim Cook received pats on the back for criticizing President Donald Trump’s transgender military ban, he’s being accused of shelving his concern for humans rights in a sell-out to Chinese censors.

Apple decided this weekend to ban all Virtual Private Network apps in the App Store across China. The violation? As Apple noted in an email to ExpressVPN, one of the country’s biggest VPN apps, it included “content illegal in China,” and it had not made sure its product “conforms with all local laws.” VPN apps are used in China to circumvent its government’s draconian censorship laws.

Did Cook let China bully the biggest tech company in the world? As TechCrunch’s Mike Butcher pointed out, Apple is feeling the heat in China.

Despite selling nearly 45 million iPhones last year, Apple’s marketshare dropped from 13.6 percent to below 10 percent in China — even as the country’s smartphone market grew 9 percent.

“This is the first time China has won the battle to pressure a major foreign tech platform to get rid of software that helped people tunnel out of China’s restrictive version of the Internet,” Butcher wrote.

With Russia announcing today it’ll also ban VPNs enabling users to view blocked sites, Apple could be seen as having set a precedent for giving in to repressive governments.

“Earlier this year China’s MIIT announced that all developers offering VPNs must obtain a license from the government,” Apple said in a statement to TheWrap, referring to China’s Ministry of Industry and Information Technology. “We have been required to remove some VPN apps in China that do not meet the new regulations. These apps remain available in all other markets where they do business.”

Cook has a fiduciary responsibility to Apple shareholders, and is the steward of a monolith with more than $250 million in cash. Still, Apple could’ve potentially benefited from pushing back on China’s VPN crackdown.

“It may actually be a better business decision for [Apple] to have held the line and shown the moral high ground for the rest of the world, which are the buyers of most of their iPhones,” said Stuart Madnick, Professor of Information Technologies at MIT Sloan School of Management, in an interview with TheWrap.

Professor Madnick took a measured approach when assessing Apple’s VPN decision, and pointed to the gospel axiom “render unto Caesar the things that are Caesar’s” as a normal cost of doing business for tech companies outside the US. Apple was between a rock and a hard place — it can’t abandon the Chinese market, but it also can’t abandon its customers.

“The [other] option that Apple had would be to refuse [suspending VPN apps], and quite likely be banned in China — in which case the services that Apple was providing would also not be available,” said Madnick. “But that doesn’t make anybody happier — other than setting a moral victory, I guess.”