“Aquaman” director James Wan has lashed at the Academy of Motion Picture Arts and Sciences for snubbing the superhero film when it was not listed among the 10 semi-finalists in the visual effects category, calling it “a f–king disgrace.”

“You and your department are the unsung heroes of this film,” Wan told visual effects supervisor Kelvin McIlwain in a Facebook comment. “The fact that your VFX peers in the Academy aren’t recognizing or appreciating what we/you’ve all contributed to the film and cinema is a f–king disgrace.”

“I’m with you James,” Mcllwain replied. “It was a complete shock to everyone that we are not in the final 10 films that will be presenting at the Academy VFX Bake-off.” 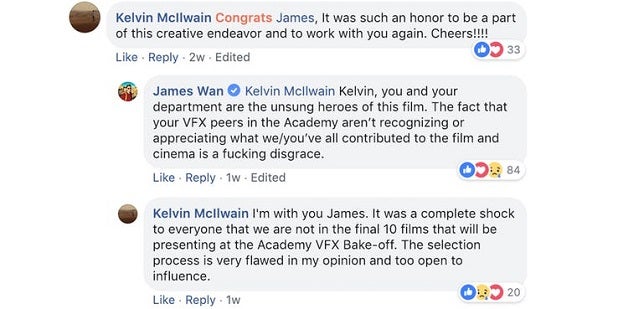 Also Read: Does 'Aquaman' Have a Post-Credits Scene?

The following 10 films made the VFX Oscars shortlist:

“Aquaman” is on its way to becoming Warner Bros’ first billion-dollar release since “The Dark Knight Rises” in 2012.

In the second weekend of its domestic run, “Aquaman” has added an estimated $51.5 million, holding on strong this holiday season with just a 24 percent drop from its $67.4 million opening.  The film is estimated to pass $900 million by the end of its run, with box office analysts saying that it could cross the $1 billion mark.