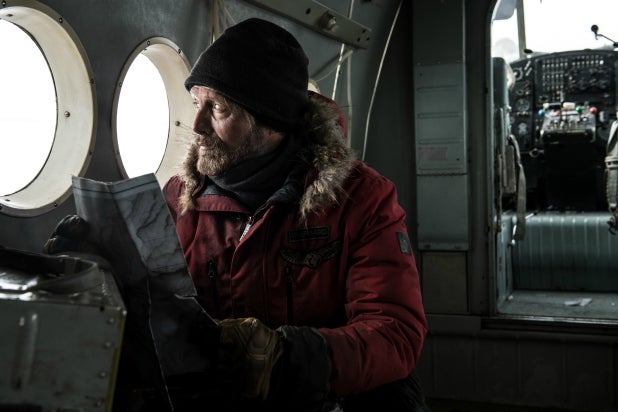 Atmosphere-driven survival sagas have been on something of a roll lately, what with the new cinematic physicality that has turned the vastness of space (“Gravity”), another planet (“The Martian”) and the sea (“All Is Lost”) into arenas for both great acting and the most immersive kind of experiential distress.

The forbidding emptiness of an icy wasteland had to be next, and for that we have Brazilian filmmaker Joe Penna to thank. Penna’s feature debut “Arctic” casts Mads Mikkelsen as a pilot stranded in the titular tundra, battling the elements, loneliness, and a high-risk effort to save his own life and another’s. And though it’s not anything new in terms of dramatic representation, in its solidly visceral execution — stressing a belief in filmmaking’s basic tools of storytelling that’s almost refreshing — it earns its place among the genre’s stalwarts. You will believe a man can freeze.

“Arctic” is Penna’s aim for movie cred after establishing himself as a flashy YouTube sensation with everything from spunky music videos to sci-fi shorts (one of which was produced by Ron Howard). Starting one’s feature career with a nearly dialogue-less journey across an unforgiving landscape may not sound like the most thrilling of calling cards, but from the movie’s earliest bids for your attention (a close-up that shows one thing until a wide shot cleverly reveals all, or a cryptic action explained by a later situation that necessitates it again), it’s obvious Penna thinks like an architect as often as he does an entertainer. We could stand to have more spectacles with his thoughtful sense of craft.

At the same time, though, Penna and his writing collaborator Ryan Morrison are happy to jettison dramatic tropes we’ve become accustomed to or, maybe to his line of thinking, bored by. When we meet Mikkelsen’s character, he’s already well-ensconced as a stranded pilot with a daily routine that includes distress-signaling, ice fishing, fiddling with some rocks, eating his catch, and sleeping in his downed plane. But we don’t get a backstory, ever. With “Arctic,” we’re truly in the realm of what’s in front of us, and in front of Overgård (we do get a name, thanks to a patch on his jacket).

Fixed-camera perspectives of the immensity of white and grey around him are such that when they’re broken by a wandering polar bear far in the distance — the likely culprit occasionally raiding his stores of trout — the feeling is a uniquely complicated one of competitiveness, acknowledgement that creatures can live out here, and, naturally, fear.

Watch Video: Netflix's 'Polar' Trailer Will Give You the Chills - and Possibly Nightmares

Though “Arctic” avoids existential monologues detailing its lead’s past (we never even find out what he was doing flying across the Arctic in the first place), we do get what amounts to maybe the ideal way to reveal character: what Overgård does not just to save himself, but also to help someone else who’s worse off. When relief from the appearance of a rescue helicopter is quickly shattered by its sudden crashing, Overgård rushes to discover two pilots, one dead, and one (Maria Thelma Smáradóttir) horribly wounded.

With unblinking tenacity, fueled partly by the thrill of scarfing down something other than fish (uncooked noodles), Overgård transports the immobilized survivor and the pair’s provisions back to his camp so he can nurse her back to health. No name is given for the young woman, who speaks no English, just a photograph of her with a man and child, which Overgård gingerly places so she can see it, a gesture so quietly moving it nearly surpasses the heartbreaking moment that just preceded it: Overgård’s eyes briefly closing in a hurried clench as he lays her down in his plane. It’s a stolen hug within a gesture of deepest caring for a total stranger, almost as if her mere presence were saving him from wretched solitude.

From there, thanks to a brave idea and a sleigh, it’s a journey of punishing fortitude and decisiveness, one that presents altruism as an element of survival as important, if not more so, than ingenuity or endurance. Overgård (a maybe too on-the-nose name) also proves to be the ideal role for Mikkelsen, who finally has an environment to match his magnetically chilly presence. Though it’s a given that we always search out his nobly melancholic eyes for what Overgård is feeling, he handles the crushing physicality of Penna’s scenario — whether threatened by wind, frost, terrain, or that bear — like an action movie pro.

Just don’t confuse “Arctic” with “Polar,” Mikkelsen’s other cold-brewed title this month, currently streaming on Netflix. That one’s soulless, kill-crazy hitman trash unworthy of its star. Only “Arctic” has the do-or-die chops to affirm Mikkelsen’s rugged allure, as well as its young filmmaker’s sensitive-showman promise.