(We’ve got spoilers for “Avengers: Endgame” in this article)

The future of the Marvel Cinematic Universe after “Avengers: Endgame” is a great big mystery — and exciting mystery which we have to try to piece together. Until we get any kind of detailed plan from the future from Marvel Studios — probably at Comic-Con in July — we’ll have to have to have our fun making guesses about what the “Black Widow” movie might be about or extrapolate based on details from “Endgame.” Such as that scene late in the movie with Thor and the Guardians of the Galaxy.

As the film is wrapping up, one moment of sorely-needed levity after so many gut-punches comes when Thor leaves New Asgard on Earth and hitches a ride to parts unknown with the Guardians of the Galaxy. As they get ready to depart, Thor jokingly refers to the group as the “Asgardians of the Galaxy,” leading to a funny exchange with Peter Quill (Chris Pratt) about who really leads the team.

While the name “Asgardians of the Galaxy” in “Avengers: Endgame” mainly served as a fun pun — and probably also to set up Thor as a full on Guardian in “Guardians of the Galaxy Vol. 3” — in the comics it’s actually an existing superhero team, and the reference could be hinting at a fun new expansion of the Guardians.

Also Read: These Are the Time Travel Rules of 'Avengers: Endgame

Created by Cullen Bunn and Matteo Lolli, the Asgardians of the Galaxy is a team of, yes, Asgardian (or Asgard-adjacent) characters that debuted last summer in the first issue of their own ongoing self-titled series. 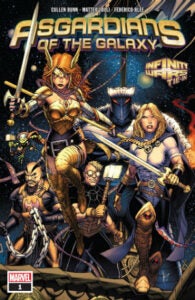 Formed after the break-up of the Guardians of the Galaxy during Marvel’s “Infinity Countdown” storyline — way too complicated to sum up here, but one thing of note is that Star Lord became the guardian of the Power Stone, sort of — the Asgardians come together to fill the “team of powerful space-faring heroes willing to get their hands dirty saving the universe” job vacancy.

Good thing too, because the villain Nebula had just forced the dwarves of Nidavellir to make her a powerful Asgardian weapon, then killed all but one of them. And then she ripped the fingernails and toenails off their corpses to make a fleet of Naglfar ships.

Nagflar, by the way, is the ship from Norse myth that ferries souls from Hel to do battle with the gods during Ragnarok. You can see where this is going: Nebula is trying to bring the end times to Asgard.

Which is where the Asgardians of the Galaxy come in. They’re assembled by Thor’s long-lost sister Angela (herself a former member of the Guardians), who recruits: 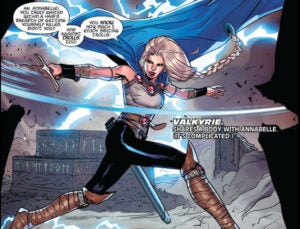 – Brunnhilde, AKA Valkyrie, the powerful Asgardian warrior who previously served with The Defenders and The Secret Avengers among other groups, who currently shares this plane of existence with:

– Annabelle Riggs. It’s complicated, but basically the same situation Thor has had with his human hosts. In addition to being able to switch places with Valkyrie as needed, Annabelle is also a gifted scientist.

– Kevin Masterson, AKA Thunderstrike. The son of Thor’s former host, Eric Masterson, he uses an enchanted mace that grants him Thor-adjacent powers.

– Skurge the Executioner. The former Asgardian supervillain-turned-hero who recently escaped from the afterlife.

– Throg, the Frog of Thunder. Formerly a human named Simon Walterson, Throg was turned into an actual frog by a vengeful witch. He moved into a frog kingdom in Central Park, and through some wacky adventures came into possession of a tiny piece of Thor’s hammer, Mjolnir, which he shaped into his own weapon, Frogjolnir — which grants him superpowers like Thor’s.

– The Destroyer. A walking, talking suit of remote-controlled armor — that is secretly being operated by:

– Kid Loki. The reincarnation of Loki who isn’t a villain, but is still the God of Mischief and as untrustworthy as someone can be and still be considered basically good. 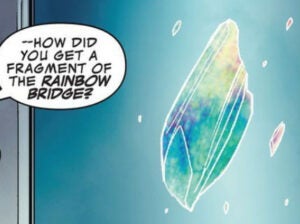 Also, fun fact: they fly around in a space ship powered by a fragment of the bifrost.

They’ve had quite a few crazy adventures in their still-ongoing series, and are currently mixed up in Marvel’s “War of the Realms” crossover event.

Of course, we have no idea if name-dropping the team was anything more than a fun joke after some very, very intense “Endgame” moments. But if some version of the team does appear in “Guardians of the Galaxy Vol. 3” — or (somebody get Taika Waititi on the phone) their own spinoff movie — it’ll be very different from the comics.

Not just because Thor isn’t a member of the Asgardians of the Galaxy in the comics. In the movies, Valkyrie, played by Tessa Thompson, doesn’t have a human alter ego, and is also currently the ruler of Asgard, poor Skurge (played by Karl Urban) sacrificed himself to save the remaining Asgardian civilians at the end of “Thor: Ragnarok,” Thor destroyed the Destroyer at the end of the first “Thor” movie, Loki (Tom Hiddleston) is also dead and so far hasn’t been resurrected as a teenager, and there’s no version of Thunderstrike yet. 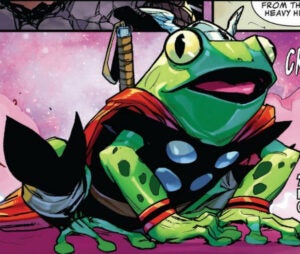 Also, Nebula (played by Karen Gillan) is a hero now, and a full-on member of the Guardians of the Galaxy. And most criminally, there’s no Throg.

But you know what? It’s never too late to bring a frog with Thor’s powers into the Marvel Cinematic Universe. Seriously, Marvel, get on that.

Since we haven’t heard anything about a fourth “Thor” movie, and with Thor joining the Guardians and Valkyrie leading the surviving Asgardians, it seems like a distinct possibility that the third “Guardians of the Galaxy” could incorporate the Asgardians in general rather than just Thor. But with returning director James Gunn tied up with DC’s “Suicide Squad” for a while, the next “Guardians” movie is probably a long way off. Which leaves us entirely too much time to speculate about what it means that Thor dropped that “Asgardians of the Galaxy” reference at the end of “Avengers: Endgame.”