With its combination of workplace sitcom and social activism, “Barbershop: The Next Cut” feels more like a binge-viewing of multiple episodes of a TV series than a movie, but even on that level, it’s a show worth watching.

Set in a combination barber shop/beauty salon in Chicago’s South Side, the titular venue’s status as a neighborhood sounding post and community meeting place provides context for the film’s speechier moments about gun violence and self-sufficiency, while the colliding of familiar comedic characters – this is the third “Barbershop” movie, fourth if you count the “Beauty Shop” spinoff – brings the laughs.

Spike Lee took a much less prosaic look at Chicago’s gang violence in last year’s challenging “Chi-Raq,” but this more straightforward presentation will probably find more traction among mainstream audiences. Like much of Lee’s work – “Next Cut” was actually directed by the auteur’s cousin, Malcolm D. Lee (“The Best Man Holiday”) – this new comedy simultaneously addresses concerns of a black audience while allowing white viewers to feel privy to conversations they might not otherwise get to hear.

The ripple effect of neighborhood violence is felt every day by shop owners Calvin (Ice Cube) and Angie (Regina Hall) and their staff, whether it’s the periodic sound of gunfire, the lack of foot traffic on their block, or the perils of accidentally booking simultaneous salon appointments for rival gang leaders. And while Calvin is a second-generation small business owner, he’s seriously considering pulling up stakes to move his shop to a safer locale on the north side of town, making efforts in that direction without bothering to consult with Angie.

Calvin’s son Jalen (Michael Rainey Jr., “Orange is the New Black”) seems to be drifting toward getting involved with gangs himself, and the city council is threatening to limit traffic flow into the South Side, effectively walling off the neighborhood from the rest of the city, so Calvin takes matters into his own hands, declaring a 48-hour truce in the neighborhood and offering free haircuts for one weekend in an attempt to fix matters. 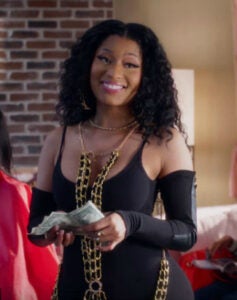 For all the talk of politics and violence, “Barbershop: The Next Cut” focuses mainly on the laughs and on the ensemble, from the malapropisms of old-timer Eddie (Cedric the Entertainer) to the attempts of sexy stylist Draya (Nicki Minaj) to inveigle herself into the marital discord of Rashad (Common) and Terri (Eve). (Minaj, it should be noted, demonstrates real comic chops here, even while cinematographer Greg Gardiner films her prodigious derrière like the monolith in “2001.”)

Screenwriters Kenya Barris (“Black-ish”) and Tracy Oliver provide plenty of one-liners for a talented cast, which includes J.B. Smoove as wheeler-dealer One-Stop, Utkarsh Ambudkar as the Indian haircutter Raja (whose most popular male haircut is “the Lupita”) and scene-stealer Lamorne Morris as the nerdy Jerrod. The script has its flaws, though, particularly one character who’s very obviously a Chekhov’s gun – or, in this case, a Chekhov’s target.

Given how little the talented Hall gets to do here, it’s frustrating how quickly Angie forgives Calvin for his attempts to yank a business that she co-owns out from under her, and the running gag bout how everyone in the shop thinks that Jerrod is gay falls particularly flat. (And if the point of the 48-hour truce is to bring press attention to the beleaguered south side, why do no TV cameras show up until the weekend is almost over?)

Ultimately, however, “Barbershop: The Final Cut” attempts a tricky balance between wacky comedy and real-world concerns, and the result is a layered cut that looks pretty good in both mirrors.