There’s been a lot of talk in the press about Netflix’s gamble in acquiring “Beasts of No Nation” for simultaneous streaming and theatrical release, but the really bold moves come from writer-director Cary Fukunaga, who has crafted a gripping film about a thoroughly depressing subject — child soldiers in Africa.

The film stands as a testament to the devastation and destruction that war visits upon the most innocent, and its story couldn’t be more timely or relevant. Audiences willing to explore such dark subject matter will be rewarded on multiple levels, not least of which are the performances by Idris Elba and newcomer Abraham Attah.

Attah stars as Agu, a young boy living in a safe zone while war rages across his unnamed African country. This separate peace comes to an end, however, and when there’s no room in the car taking Agu’s mother and baby sister to safety in the capitol, he must stay behind with his father and brother, who are soon executed by government forces. Running for safety in the bush, Agu falls in with a group of rebels led by The Commandant (Elba). 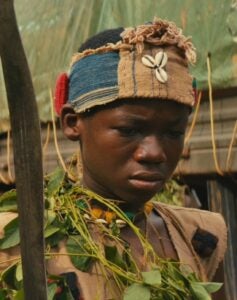 To remain with the rebels, Agu must be trained and indoctrinated, with personality-wiping exercises that resemble the hardcore religious cults of the 1970s. (At one point Agu and his fellow acolytes are buried alive so that they can be “reborn” as warriors.) Once Agu becomes a fighter, his life gets worse and worse: he must hack to death a man he knows is innocent, he’s sexually abused by a higher-up and he’s regularly given heroin (“brown-brown”) by his comrades.

Also Read: Idris Elba Responds to James Bond Author Who Thinks the Actor Is 'Too Street' to Play 007

All that keeps Agu going is the prospect of being reunited with his beloved mother, even when that prospect grows dimmer and dimmer. (He spends the first part of the film having an interior monologue to God, whom his mother said would always listen, but after a certain point, Agu decides that he has committed such atrocities that God will no longer lend him an ear.) “Beasts of No Nation” never soft-pedals its bleakness, but it also manages to allow audiences to leave with some shred of hope for Agu and his future.

Attah appears in nearly every scene, and his character trajectory steers the plot: His ability to transform from a happy, bubbly kid to a dead-eyed killer thus plays an integral role in the film’s success. Elba, in a supporting role, projects the kind of menacing charisma that would make men follow him into the jungle while also demonstrating the cracks in his veneer that prove to be his eventual undoing.

There’s some truly hard-to-watch material here — and a case could be made that Fukunaga could have included a little less of it without diminishing the film’s overall impact — but “Beasts of No Nation” is the kind of sincere, powerful filmmaking that gives socially conscious drama a good name.