If each generation gets the movie spectacles they deserve, then we probably had the new “Ben-Hur” — a scattered and hokey, if well-meaning, mess — coming.

But even in this fertile age for popular Christian-themed multiplex fare, it’s unlikely to supplant film buffs’ memories of the epic 1925 and 1959 versions, nor to create any new converts to its loud, blocky, ADD-minded fusion of pulp and pulpit.

Wallace’s busy yarn, set in the years parallel to Jesus Christ’s emergent ministry, told of childhood friends pitted against each other over conflicting allegiances: wealthy Jewish prince Judah Ben-Hur (Jack Huston, “Pride and Prejudice and Zombies”), sympathetic to his people’s rebellion against tyrannical Rome, and rising Roman military darling Messala (Toby Kebbell, “Fantastic Four”), who makes Judah an enemy when he turns him into a galley slave. Though the impact of a peaceful prophet gets the last word over the cruelty of an empire, it’s the story’s shrewd worship of both in pop culture terms — feel-good forgiveness meets blood-soaked revenge — that has always appealed to filmmakers. (Its most recent versions were an animated movie and a TV mini-series.)

Still, this “Ben-Hur” takes aim at fusing Wallace’s disparate strands into a more thematically upfront tale of a tight-knit bond shattered by hatred. Messala is now an orphan raised in Ben-Hur’s Jerusalem home as an adopted brother — the movie opens with them racing horses in an obvious nod toward their final-act coliseum showdown — but with enough wiggle room to allow flirtation between Ben-Hur’s sister Tirzah (Sofia Black-D’Elia, “The Night Of”) and the rowdy Messala. 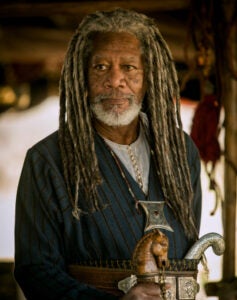 The movie also marries Ben-Hur off quickly to the kind-eyed servant girl Esther (Nazanin Boniadi, “Homeland”) rather than prolong their love story as in previous versions. It’s difficult not to imagine the filmmakers attempting to extinguish any residue from the gossipy revelation that actor Stephen Boyd and screenwriter Gore Vidal gave the Ben-Hur/Messala friendship a gay subtext in William Wyler’s Oscar-hoarding film, built as it was on loud silences and anguished-face acting.

Whatever the case, there’s no undercurrent of anything in this say-what-one-means script (by Ridley and Keith Clarke, “The Way Back”) as the ambitious Messala pushes his friend to name underground Jewish “zealots” conspiring against Rome; Ben-Hur refuses to do so, until an attempt on Pontius Pilate’s life points to his house and sends our hero into bondage, and his family to prison.

By that point, Bekmambetov’s graceless handling of actors furiously delivering their motivations — Kebbell’s volatility comes off a tad more interesting than Huston’s whispery earnestness — has been mostly wince-worthy, never more so than when Ben-Hur’s path crosses that of Jesus (Rodrigo Santoro). (Each offers the other a drink of water at their respective lowest points.) Where Wyler drew haunting power from keeping Jesus a faceless and voiceless figure, like a rumor of deliverance shadowing the hero’s moral struggle, here we get walking, talking son-of-God face time, and the effect is oddly diminishing, turning Jesus into a religious-movie animatronic, spouting greatest-hits scripture.

When the action finally arrives, you can feel Bekmambetov lick his lips at leaving dialogue scenes and static first-century locations behind. (Even cinematographer Oliver Wood seems uninspired to make ancient Jerusalem, inside or outside, pop onscreen.) Though the brief flashes of Messala’s combat prowess are perfunctorily chaotic, the sea battle is now a claustrophobic virtual-reality experience from a below-deck viewpoint, all flaming arrows, ramming ships, smashed beams, tossed bodies and tumbling underwater peril, with the warship’s mast as a floating cross Ben-Hur clings to at the end as a friendly metaphoric reminder. It’s an over-the-top set piece, but a brutally effective one.

It’s the chariot that awaits, of course, but the anticipated contest, coming after Ben-Hur’s racing tutelage under an African sheik (a dignity-lending, dreadlocked Morgan Freeman, who also narrates), is only serviceably exciting, and far from the victory lap it wants or needs to be. A software-tweaked riff on already iconic, scary-real greatness twice-delivered to moviegoers, this climactic race foregoes the crisp, dynamic framing and heroic pacing of the silent and 1959 versions in favor of current editing styles and action-fatigue aesthetics. The result is something blunt and overstuffed instead of large-scale heartstopping.

“Ben-Hur” is so chariot-branded a property, the sequence is even revived for the ludicrously conceived end credits, with names charging around the circus, kicking up digital dust. But by this time, Bekmambetov has already wound everything down with crucifixion and miracles in quick succession, and a contrived, upbeat twist on Wallace’s resolution of its central conflict. What’s left is the feeling of a slapped-together saga exhaling its last dutiful breath. This “Ben-Hur” may not be an epic fail, but its steady stream of shortcomings are certainly a cautionary journey for anybody with the hubris to try and rebuild the monuments of movies past.

From ”The Dark Knight“ to ”Jurassic World,“ these summer releases all topped the domestic and foreign box office, according to BoxOfficeMojo