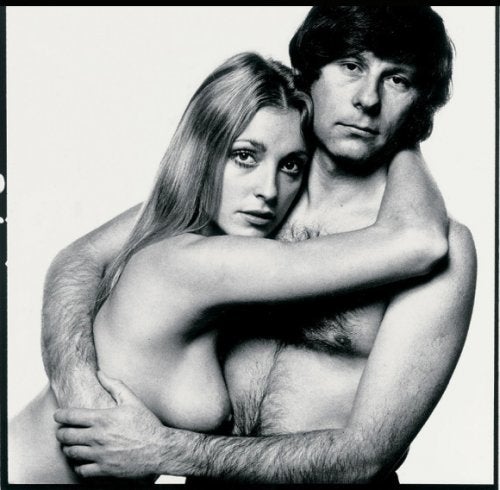 Roman Polanski just can’t stay out of the news.

Forty years after he and doomed wife Sharon Tate posed nude for British photographer David Bailey, the image has sold at auction for $11,250 Monday. (Reuters and some other sources put the figure at $12,325.)

For all the art-school commentary about Bailey’s oeuvre, you can’t help but hear Patty Duke, as Neely O’Hara in “Valley of the Dolls,” dismiss the modeling pretensions of Tate’s character: “Art films? Nudies! That's all they are. Nudies!”

The sale, made by Christie’s of New York, to an unidentified buyer, has only added to the rolling waves of controversy surrounding the film director. There are those who are irked that Polanski recently moved from a Swiss jail cell to his Gstaad chalet to await word of a decision regarding a U.S. extradition request.

Typical of this segment of aggrieved punditry is Ann Coulter, who told Sean Hannity after Polanski's September arrest, “You have all of Hollywood and media elites defending Roman Polanski for anally raping a 13-year-old.”

Others view the picture as something of necro-porn, given that months after Bailey took his portrait shot, the pregnant Tate would be gruesomely murdered by the Manson family.

Then again, there are those who shudder at the idea that Polanski was nude at any point in time: “Does anyone really want to see Mr. Polanski half nude at any age?” asked CubeCandy.

The black and white picture itself – less John and Yoko than centerfold fantasy — embodies the 1960s, or at least a male version of it. The two glamorous, embracing subjects are tilted 45 degrees in frame, with the taller Tate appearing shorter and waifisly submissive; and they are topless – which doesn’t mean much in Polanski’s case, but plenty for Tate’s. But if the auctioned photo shows that people require little excuse to attack Polanski, it also proves that it’s never too late to fall in love with Sharon Tate.