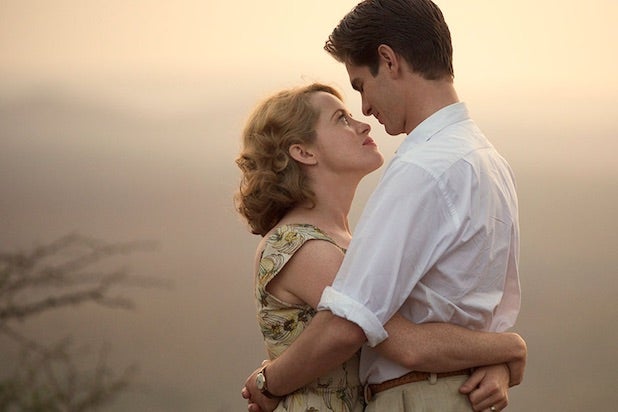 Andy Serkis’ directorial debut, “Breathe,” opens with a lavish aerial shot that soars over a hilly countryside so lush and picturesque that you practically expect the sequence to end with a zoom in to the quaint home of Bilbo Baggins in Hobbiton.

And comments like that, of course, are completely unfair to Serkis, who might be best-known for playing the tortured Gollum in Peter Jackson’s “Lord of the Rings” movies, and whose move from performance-capture acting to directing doesn’t deserve to be saddled with silly comparisons to “LOTR.”

And yet Serkis, who is also earning accolades for his latest performance as Caesar in “Battle for the Planet of the Apes,” clearly learned a thing or two directing the second unit on those films. For a first-time director, he’s surprisingly sure-handed with swooping vistas and swelling strings.

Also Read: 'War for the Planet of the Apes' Star Andy Serkis to Awards Voters: I'm a Real Actor

“Breathe,” which premiered on Monday at the Toronto International Film Festival, is a small personal story that also manages to be big and beautiful — in fact, it’s probably better at the big and beautiful than the small and personal.

Andrew Garfield stars in this real-life story as Robin Cavendish, a young Brit who in 1958 at the age of 28 was diagnosed with polio, which left him unable to move his body from the neck down. Claire Foy plays his wife Diana, who was instrumental in pushing him to leave the hospital, working tirelessly as Robin became the first patient with his condition in Britain to live outside a hospital, and then the first to use a wheelchair with built-in breathing apparatus.

Of course, we’ve been down this road before: Inspirational true-life stories of brave heroes overcoming obstacles are a cinematic staple, and this one could draw comparisons to the recent “The Theory of Everything,” for which Eddie Redmanye won an Oscar for playing Stephen Hawking.

Garfield does an admirable job of acting from the neck up; he’s always been very good at earnestness, which is what he’s called upon to deliver here. And Foy inserts playfulness and bite into her role as the saintly provider; this is Diana’s story, too, and she makes her side count as much as his.

For the most part, “Breathe” is a serious story told in a light way. Even when Robin has setbacks or disaster seems imminent — e.g., a trip to Spain that includes a blown respirator motor on a remote road — the potential catastrophe quickly turns into nothing more than a misadventure, a fun story to pass along.

The fact that Robin’s son Jonathan is a producer on the film likely has something to do with this – but so does Serkis, whose sweet spot as a director lies in conjuring up the bucolic, not the gritty. (To use another unfair “LOTR” comparison, this is a movie made by Smeagol rather than Gollum.)

But “Breathe” goes down easy, with intimate moments between Garfield and Foy that are among the film’s best, and an ending that may well have you reaching for a hankie even if you’d tried to resist earlier trailer-made lines like “I don’t want to just survive – I want to truly live.”

Like Bing Crosby’s version of Cole Porter’s “True Love,” which is heard prominently early in the film, “Breathe” might be a little too slick and shiny, but its pleasures are real.