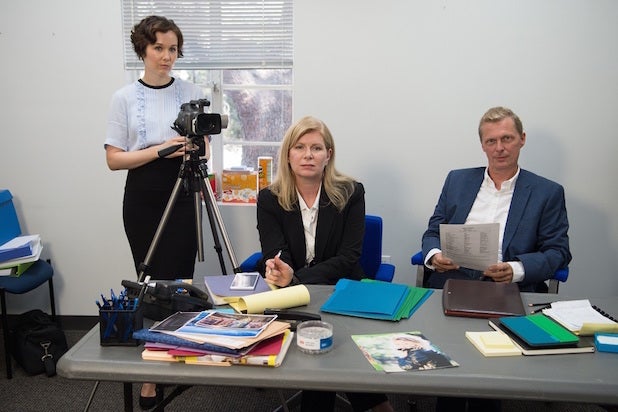 Casting directors in a scene from "La La Land" / Lionsgate

The 32nd Annual Artios Awards, taking place on Thursday night at the Beverly Hilton Hotel, come at an auspicious time for the artists honored. In 2013, after years of lobbying, the Academy created a new Casting Directors Branch — and at November’s Governors Awards, legendary casting director Lynn Stalmaster received an Honorary Oscar, the first ever bestowed on a member of his profession.

Can an actual Oscar category for casting be far behind? That remains to be seen — adding categories is unquestionably a tough call for the Academy already under fire for the length of the annual telecast. In the meantime, the Casting Society of America’s Artios Awards will cover the field, with six different film categories whose nominees include the casting directors behind films ranging from “Arrival” to “Zootopia.”

In advance of the show, TheWrap spoke to the casting directors of three of the most acclaimed films of 2016: Deborah Aquila and Tricia Wood from “La La Land,” Yesi Ramirez from “Moonlight” and Douglas Aibel from “Manchester by the Sea.” The interviews were done separately, but we asked them a few of the same questions.

What were the biggest challenges in casting these films?
TRICIA WOOD, “LA LA LAND” Finding triple threats, meaning actors who could sing, dance and act. We had to give [director] Damien [Chazelle] the kind of cast that could do 18 hours days of singing, dancing and acting.

YESI RAMIREZ, “MOONLIGHT” Straight off the bat, the difficulty was figuring out how we were going to make these three stories come together. I was concerned that the three actors [who played the main character, Chiron] all had to somehow look like each other, and you had to believe they were the same person without taking the audience out of the movie.

[Director] Barry [Jenkins] was very much about, “Let’s find the best actors that fit these roles,” and there was definitely a lot of trust and faith that if they were giving their best performance they would somehow come together. And in auditions it was clear that there was a thread — the ones that stood out spoke to me with their eyes. That helped tie them together.

DOUGLAS AIBEL, “MANCHESTER BY THE SEA” First and foremost, the search for our young male lead opposite Casey [Affleck] was a great challenge. We saw hundred of young actors, and that process was very particular, because the film required a really remarkable young actor who could bring both sensitivity and a sardonic edge, a smart-alecky style.

When we were reading boys, we focused on the more comic scenes, because we wanted to see if people could find the wit and the sharpness in these characters. In a way, that’s even harder to play in an audition than the tragedy.

And when I first read the script, I thought of Lucas Hedges immediately. I had cast him when he was 10 or 11 years old in “Moonrise Kingdom,” where he played the villainous child. He went though a very rigorous audition process, and I was really thrilled when it worked out with him.

All of these movies are specific to a certain place: Manchester-by-the-Sea, Massachusetts, Los Angeles, and the Liberty Square neighborhood of Miami. Was location a big concern when you cast the film?
AIBEL Absolutely. The Manchester accent is not a Boston accent. It’s very particular to its area, and you want to get it right. I’m sure it drives people from that area crazy when they’re depicted with fake accents, so we really wanted to do it well.

Damien knew what he wanted, but he also let us play. So we brought in folks a little bit left and a little bit right of what was written. We had several girls in the mix for Emma’s roommates. And it might not even be that his favorite one ended up in the film — you had to get the best mix.

RAMIREZ It was important. I’m also from Miami. I didn’t grow up in the neighborhood that Barry and [writer] Tarell [Alvin McCraney] grew up in, but I am very familiar with the feel of Miami and the people of Miami. We were casting in Miami and Los Angeles and New York, but it was important for these characters to feel that they were in this world, especially the young actors around our lead characters.

There’s now a Casting Directors branch in the Academy, after years of lobbying. What would it mean to one day have a casting category at the Oscars?
RAMIREZ That would be amazing. There are always people who don’t think we should receive that kind of recognition, but I think we’re such an integral part of putting it all together that it would be amazing to have that acknowledgement. It saddens me that casting directors who have passed did not have that opportunity, but it makes me thankful for the future.

AIBEL It’s high time that the work be recognized. Casting has evolved through the years, and there are so many giants in the field, like Marion Dougherty and Lynn Stalmaster, who brought a very personal and passionate stamp to it. I think of it as an art and not just a craft. I’m not a lobbyist, but I think people in the industry are beginning to recognize that and see it as a creative part of the puzzle.

WOOD Deb and I are both Academy members. We’re very happy to have our branch, and we are going to continue to work for our branch … in whatever capacity they need.