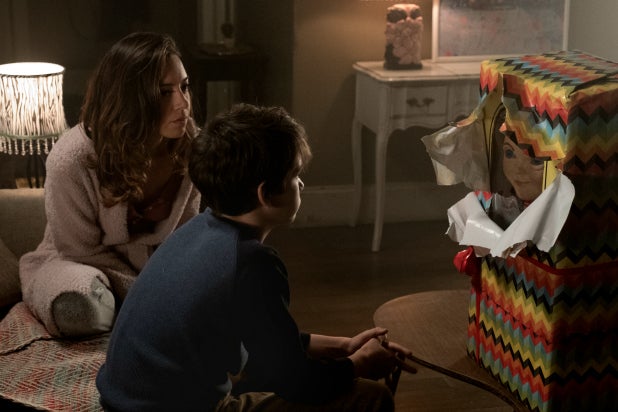 Well, here’s a conundrum: die-hard devotees of any aging franchise are the audience most likely to embrace each new resurrection. But in the case of the 31-year-old “Child’s Play” series, many fans have been outraged by the fact that creator Don Mancini and voice-of-Chucky Brad Dourif were conspicuously replaced for the new reboot.

Despite the good faith efforts of director Lars Klevberg (“Polaroid”) and writer Tyler Burton Smith, it’s unlikely that this entry will seduce those who loyally followed all seven of Mancini’s previous “Chucky” movies. Indeed, they may want to wait until Mancini’s own, upcoming TV version is released next year. But after 2004’s “Seed of Chucky,” which devolved into go-for-broke absurdity — as did two straight-to-DVD installments that followed — it has to be acknowledged that even sociopathic toys could use an occasional gush of new blood.

In an overt nod to fanboy credibility, Chucky’s voice is now supplied by Mark Hamill, a coup Smith (making a promising feature debut) amusingly exploits. (“Han Solo” is one emphatically rejected suggestion when it comes time to name the doll.)

Smith and Klevberg make some other key changes from the 1988 original, but they start at a similar point: a lonely kid named Andy (an excellent Gabriel Bateman, “American Gothic” ) gets the year’s hottest electronic toy from his struggling single mom, Karen (Aubrey Plaza). Karen works at a local Walmart-type superstore, and when an unhappy customer brings back an already-opened Buddi doll, she jumps at the chance to reclaim it.

She doesn’t know what we learned in the opening credits: The safety limits were removed on this particular doll’s internal computer chip. Even so, at first Chucky seems pretty sweet. As he keeps saying, he just wants to be Andy’s BFF.

But when other people (and an unfortunate pet) get in the way, Chucky starts to become a little, shall we say, overprotective. His eyes glint with curiosity when he sees the kitchen knife, but he really gets inspired when Andy and his friends (Beatrice Kitsos, Ty Consiglio) watch “The Texas Chainsaw Massacre 2.”

Klevberg and Smith have spoken about how they see their digitally-programmed Chucky as a reflection of the modern age, an Amazon Alexa writ large and run amok. But they aren’t really interested in any grand statements. They just want to make you laugh, and then make you jump, before you cringe.

They succeed, to some extent, on all three counts. The first half of the movie is by far the strongest, and it’s no coincidence that it’s also simultaneously the funniest and the most sincere. Where the first film found a child terrorized by a killer who happened to be in a doll’s body, this movie is about a lonely teen with a new friend who represents an uncontrolled id.

It’s an intriguing twist that Chucky genuinely wants to bond with and please Andy, and also that he’s just, you know, going about it in all the wrong ways. The movie was produced by “It” team Seth Grahame-Smith and David Katzenberg, and you can see the same interest in childhood fears, confusion, and emotional development. The kids in this movie are trying their best to navigate a strange and dangerous adult world from a place of poignant innocence. The fact that Chucky himself starts out as one of those kids is the movie’s neatest trick.

So things start to fall apart when he starts to fall apart. After Andy discovers Chucky’s violent tendencies, another character steps in to take control. At this point, the doll shifts from misguided sociopath-in-training to thoroughly generic slasher psychopath. It’s a shame, particularly since there’s nothing interesting about the slashing, either. No hard-core horror fan is likely to be satisfied by the hurried carnage that seems designed to fill a quota before the movie ends.

It’s also strange that Smith waits until very late in the game to exploit surveillance-era Chucky’s technological potential. There are a few ominous shots of Andy’s hearing aid, but nothing comes of it. There’s a hint at a “Poltergeist”-ian TV takeover, but it fizzles. We get glancing commentary about iPhone addiction, but that barely sticks. In fact, Chucky makes the most impact when he’s trying hardest to be human, as emphasized by Hamill’s deft vocal shifts and the intentionally low-res puppetry and special effects.

That may be because the movie’s biggest strength is its balance between mordant humor and psychological fear. Everyone’s focus seems to be in a very old-fashioned place, and here that’s an asset. The lead actors are uniformly committed, with Bateman forming touching connections to both a sweetly wry Plaza and a memorable Brian Tyree Henry (“Atlanta,” “If Beale Street Could Talk”), who plays the local detective. Ultimately it’s their bond, rather than Chucky’s final freakout, that suggest this creaky franchise isn’t quite played out yet.