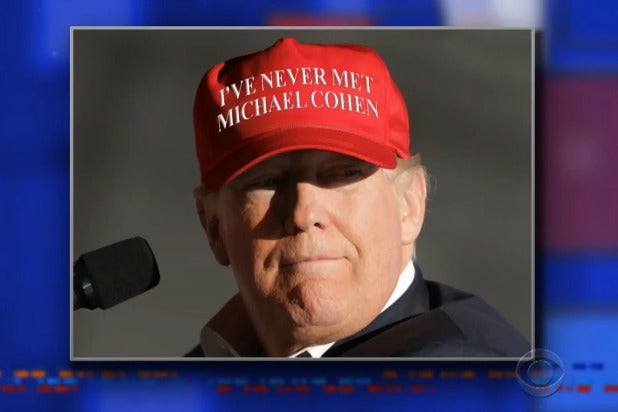 It may seem hard to believe, but it’s only been 15 months since Donald Trump was inaugurated. We’re only 31 percent of the way through Trump’s first term, and re-election talk is already coming up rampantly. And on “The Late Show” Friday night, host Stephen Colbert joked about that, the continuing legal drama surrounding Trump’s lawyer Michael Cohen, and the fact that many Republicans in Congress seem reticent to endorse the re-election bid of their party’s sitting president.

“Speaking of days to look forward to: the 2020 election. It is still 200 years away, but Donald Trump has already declared that he’s running,” Colbert joked, referencing the perceived slowdown of time in Trump’s America. “He’s even revealed his 2020 slogan: ‘Keep America Great!’ Though if I were him, I’d update that to ‘I’ve Never Met Michael Cohen.’ “

Then “The Late Show” displayed Trump’s signature red hat with that slogan emblazoned on it.

“Now, normally, normally, if the president declares he is running for re-election, Republicans would be lining up to endorse a Republican president for re-election. But nothing is normal anymore,” Colbert said before playing a series of clips of Republican members of Congress talking to TV news hosts, acting like they really, really just don’t want to talk about this. The series climaxed with Senator Bob Corker declaring on CNN: “I want to know who else is in the field.”

“Yeah. Yeah. That’s understandable. He just wants to know who else is in the field, because he’s heard a lot of good things about ‘Who Else.’ And that’s a pretty widespread feeling. Just ask Republican senator and leader of the congressional rhyming caucus, Ron Johnson from Wisconsin,” Colbert said.

In the next clip, Johnson told CNN’s Chris Cuomo that “it’s way too early to be talking about that” because “it could be a completely different world by 2020.” A concept Colbert was very amused by, as he slipped into an impersonation of Senator Johnson elaborating on just how different the world could be by then.

Also Read: Jimmy Kimmel: If Trump Is Innocent, 'Why Does It Matter if Cohen Flips?'

“It could be a completely different world by 2020,” Colbert said. “It could be a cybernetic cube, could be a series of scorched islands ruled by telepathic coral. We’ve all seen ‘Planet of the Apes.’ Before I endorse Trump, I’d like to take a look at the policies of Dr. Zaius. It could be anything. We could be living on spice mines on Corellian 4. All of this could be an illusion created by an evil genius to deceive us about the true nature of reality. And– I’m high.”

Colbert also got in a zinger implying that many congressional Republicans whose terms are up this year might be using opioids to cope with the pain.

“And senator Lamar Alexander’s response when asked if he backed the president? ‘Look, I’m focused on opioids.’ Oh, I bet a lot of Republicans facing re-election are focused on opioids right now,” Colbert said.

You can watch Colbert’s monologue from Friday night’s episode of “The Late Show” in the videos embedded below.