Back in the summer of 1984, the world was captivated by a trio of trash-talking “scientists” who became Manhattan’s only hope against an angry, Godzilla-sized Stay Puft Marshmallow Man. “Ghostbusters” went on to make nearly $350 million worldwide. Five years later, Dan Aykroyd, Harold Ramis, Bill Murray and Ernie Hudson re-teamed for a sequel, which grossed over $215 million worldwide. Since then, there have been animated cartoons and not much else. Until now.

Aykroyd has gathered most of the original troops — only Sigourney Weaver and Rick Moranis abstained — for Atari’s “Ghostbusters: The Videogame,” which comes out Tuesday, and plays out like the now-in-development third movie. Here, the 56-year-old actor talks about everything from the new Hollywood to his latest “Ghostbusters” offshoot to real-life gay ghostbusting.

You didn’t all get in a room and do it together?
Billy’s making a movie. He’s the Murricane Man. How do you contain energy like that? You’d need some kind of a super vanadium neck charged with a polarity that could pulse and phase that we haven’t been able to master yet in electronics to contain the energy of the Murricane. And I spend my life on the road.

My family comes with me, like the Five Little Foys –remember that movie with Bob Hope? I play casinos, corporate events. We do the Blues Brothers, and my kids come with me — they wear black dresses and put earplugs in and dance. So it was hard to pin us all down. 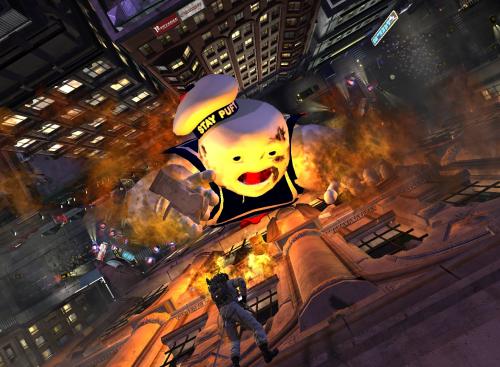 You’ve talked about a third “Ghostbusters” movie …
Well, I think this movie is going to be written. But we don’t know until it is written. In the meantime, the game is real, and to me it’s the third movie because now it’s the only thing that exists — that depicts the characters in a new adventure and in a new light and with that great feeling of Manhattan. They’ve done a tremendous job of showing the city. They’ve done everything that one would expect in a game.

I think the third movie might be a sequel to this. Now you have them acting hand-in-hand, and it’s interactive, if you will. So the third movie, if it is a reality, I’m sure a concept for a game will come out of that and then that game may feed to a story for a fourth one. It’s just nice that there’s this creative stimuli going on in Hollywood through the gaming community.

Videogames seem to have come into their own as a storytelling medium.
I have two incredibly cool science-fiction stories right now that I think I am going to just skip the movies altogether. I’m going to find some gamers and go with these guys again and build it. I’ll just give them the scripts and say, Pretend this movie got made. It would be impossible to make them as movies, but maybe if the games are good enough, they could become movies. So I am excited by this world. I am still learning about it. 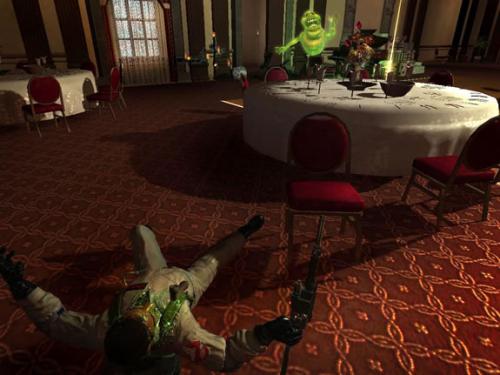 Games seem to be changing the movie industry …
Today, games make movies. The studio system that made “Ghostbusters” — my first pitch to the old time agent, my first time pitch old time manager, my first pitch to the old time studio head, these guys are long gone, finished, retired. You know, I can go in and pitch a script, but there are comers now in their twenties and thirties that have the sensibilities of today.

The movie world has essentially not changed, except for the CGI part of it. The exposure of film is still at 24 frames per second, it’s done on a Panaflex camera, which doesn’t even link up to sound. It all has to be married in some Wizard of Oz room later and then put together. But eventually the film business and the gaming business are going to embrace everything that is possible in a digital age and provide entertainment.

How do you see film evolving?
There are people who are still going to hang on to film — and they should because of the quality, the warmth of it. But the world of the digital computer, the use of crystals in computers and storage applications, it’s going to get to the point where you won’t see films with actors anymore — it’s going to put actors like me right out of work. It will all be the type of animated figure that we see done in computer games. They may even go so far as to use robots with real flesh — like they did in “Jurassic Park.” Look at what they’re doing now, and imagine what can they do in 50 years.

What do you think about Sigourney Weaver’s decision to not be in the game?
She’s watching out for her and our legacy there a little bit, which is understandable. But I think had she benefited from meeting the programmers early on and seeing what they were doing, she would have wanted to be involved. But you know, Alyssa Milano’s character leads us to a new generation. It’s a new story, and when we do the "Ghostbusters 3" movie, hopefully Sigourney will be in it.

So, with a "Ghostbusters" game and potential new movie in the works, have you had any supernatural encounters?
We were living in Mama Cass Elliot’s old estate, and I’d heard stories about a ghost there. One night, I was alone, and I locked the door — usually ghosts won’t go through the locked door. Did you see that movie “The Others”? But somehow something happened. He must have gone around the other way and come in. I think he was a gay ghost and he just hopped into bed with me.

I looked over and I swear — I know what I saw, and the mattress was depressed and I could feel a presence. So I just turned over and nubbed my butt up next to him and went to sleep.