Darnella Frazier, the Minneapolis teenager who filmed the murder of George Floyd in 2020, said in a Facebook post Tuesday that her uncle was the innocent man killed by police during a high-speed chase in Minneapolis on Tuesday morning.

“I honestly can’t believe I’m making this post right now,” Frazier wrote. “I’m so hurt…nothing feels real. I woke up to the most horrible news. MINNEAPOLIS police Killed my uncle. MY uncle… Another black man lost his life in the hands of the police!”

According to the Minneapolis Star Tribune, just after midnight on Tuesday morning a police vehicle attempting to catch the driver of a stolen vehicle, which they claim was linked to several robberies, collided with a car that was not involved with the chase. The driver of that car was taken to a hospital and pronounced dead soon after. A police officer was treated for minor injuries and released; the suspect was not apprehended and, according to the Star Tribune, remains at large. 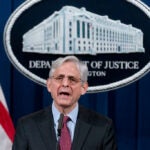 Frazier identified the driver who died as her uncle, Leneal Lamont Frazier, and denounced the actions of police that led to his death, writing in part, “Minneapolis police has cost my whole family a big loss. … It’s not fair how the police can just go around killing people…WHY ARE YOU DOING A HIGH SPEED CHASE ON A RESIDENTIAL RODE??? You took an innocent life trying to catch someone else.”

Frazier also shared recent memories of her uncle and posted a link to a GoFundMe page set up to help his family.

Frazier was awarded a Special Citation during the 2021 Pulitzer Prize ceremony in June. The Pulitzer board cited Frazier’s “courageous” video of Floyd’s death, which “spurred protests against police brutality around the world” for “highlighting the crucial role of citizens in journalists’ quest for truth and justice.”

Read her full statement about her uncle here.