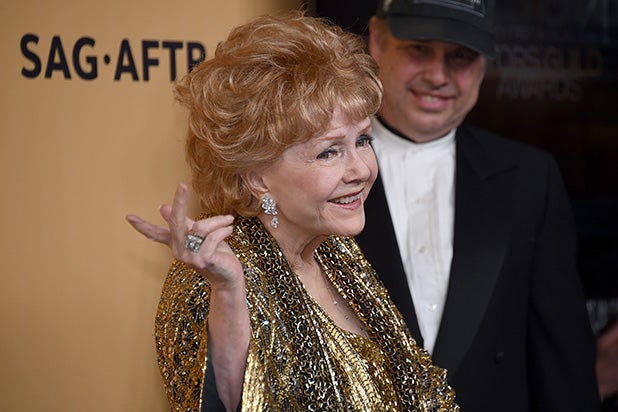 Debbie Reynolds died on Wednesday at the age of 84, just one day after the death of her daughter, “Star Wars” heroine Carrie Fisher, TheWrap has confirmed.

“She’s with Carrie,” Reynolds’ son Todd Fisher said in a statement, referring to his sister, who died Tuesday morning.

The Oscar-nominated actress was hospitalized after reportedly suffering a possible stroke on Wednesday. She was rushed to a hospital at around 1 p.m. PT.

Reynolds’ daughter, the beloved actress best known for playing Princess Leia in the “Star Wars” franchise, died on Tuesday after suffering a severe heart attack while returning to Los Angeles on a United Airlines flight from London last week.

Shortly after news of her daughter’s death was announced, Reynolds shared a message on Facebook thanking fans for their support. “Thank you to everyone who has embraced the gifts and talents of my beloved and amazing daughter,” she wrote. “I am grateful for your thoughts and prayers that are now guiding her to her next stop. Love Carrie’s Mother.”

The mother-daughter duo recently starred together in the HBO documentary “Bright Lights,” which premiered at Cannes back in May. Directed by Fisher Stevens and Alexis Bloom, the doc looked back on the pair’s relationship through the years, as well as their equally monumental legacies in Hollywood.

Reynolds’ breakthrough role came in 1950 movie musical “Three Little Words,” for which she was nominated for the “New Star of the Year” award at the Golden Globes. Two years later, she starred in her perhaps her most famous role, in the classic musical “Singin’ in the Rain,” alongside Gene Kelly and Donald O’Connor. The movie made her an international star.

Her other notable credits include “Bundle of Joy,” “The Catered Affair,” “Tammy and the Bachelor,” “In & Out,” “Mother,” “The Singing Nun” and “The Unsinkable Molly Brown,” for which she received Best Actress nominations at both the Golden Globes and the Academy Awards.

On television, Reynolds starred in her own NBC sitcom, “The Debbie Reynolds Show,” for one season in 1969, earning her a Golden Globe nomination for Best Actress in a TV comedy. She also received an Emmy nomination in 2000 for a guest turn on “Will & Grace.”

She received the Screen Actors Guild Lifetime Achievement award in 2015, which was presented at the ceremony by Fisher.

In 2016, the Academy of Motion Picture Arts Board of Governors awarded Reynolds the Jean Hersholt Humanitarian Award for her work as a founding member of the Thalians, a charitable organization to promote awareness and treatment of mental health issues.

She served as the group’s president almost continuously from 1957 to 2011, adding numerous terms as board chair and frequently presiding over its annual fundraising gala.