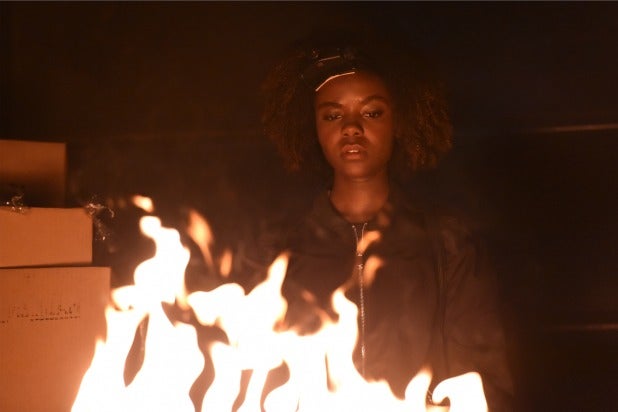 Disney was once awfully good at a certain kind of cheerful kid-fueled adventure comedy, and it’s in that spirit that Sydney Freeland’s charming sophomore feature “Deidra & Laney Rob a Train” operates, save the kind of PG-13 language and grownup themes that might have given old Walt pause.

Freeland, whose first feature “Drunktown’s Finest” explored the lives of a trio of Navajo reservation outsiders, brings some of that same small-community verisimilitude and misfit empathy to Shelby Farrell’s Idaho-set screenplay. But the director adds the right mix of deadpan humor and mildly exaggerated performance to keep things squarely entertaining for so desperate a situation.

Whip-smart, opportunistic senior Deidra Tanner (Murray) likes the quick cash she gets for tutoring her dumber fellow students; she wants to go to college but gets pessimistic about her chances to escape. As she explains to her exasperated guidance counselor (Sasheer Zamata, “Saturday Night Live”), “No Mesopotamian farmer asked his son, ‘What do you want to be?'”

With single mother Marigold (Danielle Nicolet, “The Flash”) constantly working and a deadbeat dad out of the picture, Deidra’s the organized one at home, making sure her distracted little brother doesn’t get killed by the train that runs by their house and avoiding conflict with middle sibling Laney (Crow), who finds it hard to make it through a day of high school without enduring some form of humiliation as an unpopular loner of meager means. When a well-meaning teacher (Missi Pyle) makes Laney a Teen Miss Idaho finalist, to the dismay of her pageant-obsessed friend Claire (Brooke Markham, “Foursome”), it only seems to add to her social pressures.

But that’s all the prelude to a true family-fracturing crisis when Marigold has a TV-smashing meltdown (“This is who I am!”) at her electronics-store job and gets thrown in jail. (In an especially funny visitation scene that horrifies Deidra, mom smiles like a spa vacationer, calls prison life “therapeutic” and praises a law requiring a salad at every meal.) The reality, though, is that Child Protective Services is watching, and if Deidra can’t take care of Laney and Jet, it’s foster care for the Tanner brood. With unpaid bills, food and mom’s bail to pay for, Deidra needs almost $12,000 and fast.

Had “Deidra & Laney” settled for just being a lovable, empowering heist comedy with a dogged investigative foil — a vaping, beady-eyed Tim Blake Nelson as a self-important railroad detective — it would have certainly sufficed as an efficient smile-inducer. There’s the skilled cast, for one thing, starting with the fresh-faced but soulful leads: Murray has fun nearly always seeming like the smartest one in the room (if also the most frustrated), while Crow handles Laney’s roiling discomfort with engaging authority.

But because Freeland and Farrell keep close tabs on how the good criminal fun starts to affect Deidra and Laney as turbulent adolescents in dire straits, the movie always feels socially conscious and smartly sympathetic, even when it’s effortlessly humorous. An early classroom scene in which Deidra expertly lays out a capsule definition of the arguments for free will vs. genetic determination gives you an idea where some of her hardship attitudes lie. (Is she doomed to never get out?)

The movie also does well thoughtfully addressing the complicated feelings stressed kids have for their struggling parents and, in a late confrontation scene, it finds a touching way to re-examine what sparked mom’s breakdown, a scene initially played as comedy. Also, the fact that the Tanner family is biracial adds a welcome tinge of modern reality, even with a dusty rural backdrop (Utah for Idaho) usually associated with ethnically homogeneous casts.

Movies like “Deidra & Laney” don’t typically need expert plotting to keep us glued, but as the girls’ scheme expands and threatens to upend their lives in ways it’s easy to anticipate, some steam is lost in the mostly formulaic effort to wrap things up. It doesn’t dissipate the pervasively friendly vibe, though, or keep you from thinking you’d happily watch these girl-power heroines discover another mischievous caper to solve their problems.

“Deidra & Laney Rob a Train” premieres on Netflix on March 17.