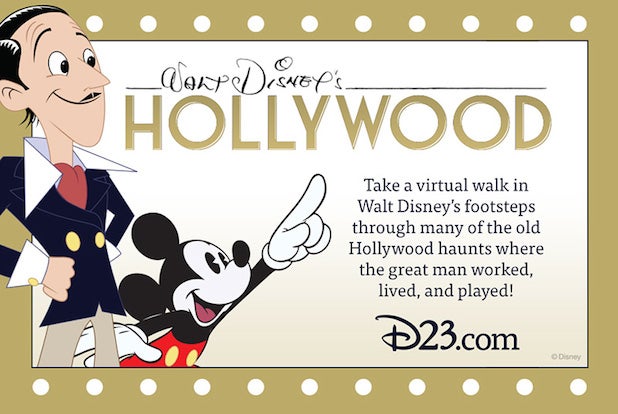 Walt Disney moved from Kansas City to Hollywood in 1923. The rest is history — some of which has been forgotten until now.

Seeking to further educate the world about its founder, Disney’s namesake studio’s official fan club, D23, is launching an interactive map of Walt’s Los Angeles, highlighting the places he lived and worked for over 40 years. The club’s new map offers a “virtual walk in Walt Disney’s footsteps through many of the old Hollywood haunts” — including Carthay Circle Theatre, The Prospect Studios, the Pan Pacific Auditorium, the Walt Disney Studios that once stood on Hyperion Avenue — and is available for all to see on their website.

Disney has given TheWrap an exclusive look at several of the photos and stories on the map, including pictures from Walt’s personal collection.

From left: Lillian and Walt, sister Ruth, and brother Roy and wife Edna stand in front of the first studio on Kingswell Avenue in Los Angeles.

When 21-year-old Walt Disney first arrived in Los Angeles in 1923, the budding animator from Marceline, Missouri had $40 in his pocket and a cardboard suitcase. But he also had big dreams.

The majestic Carthay Circle Theatre at the end of Buena Vista Street is a replica of the famous Hollywood movie palace where Snow White and the Seven Dwarfs–the film Walt bet everything on–made its triumphant world premiere in 1937.

While Imagineers have created a landscape that will give guests the sense that they are walking in Walt’s footsteps, present-day Los Angeles is filled with the real places that allow us to actually retrace the path of Walt’s life. The first house where he rented a room, the storefront where he started his first studio, the merry-go-round at Griffith Park where he watched his daughters ride the painted horses and dreamed of an amusement park that families could enjoy together–they are still there, many of them quietly preserved with only subtle markers of their historical significance.

This concrete and steel bridge in Atwater Village spans Interstate 5 and the Los Angeles River and was completed in 1929, just three years after Walt and Roy opened Walt Disney Studios a half-mile away.

“Just as Marceline, Missouri, affected Walt’s early life, his environs in Los Angeles wielded great influence over him as he moved West and began his company,” says Dave Smith, founder of the Walt Disney Archives, who retired as chief archivist in 2010. “It is always gratifying for me to take friends and Disney fans on a tour along paths to the sites where Walt lived, worked and played around Los Angeles; it helps them to understand him all the more and to appreciate how much his environment influenced everything he did in his life.”