This has to be the, um, whackiest story of the 2016 presidential race.

Now before you go sticking a fork in your eyes, The Donald’s role in the movie is pretty tame. His cameo consists of  breaking a bottle of champagne on a Playboy-branded limo while several of the playmates are visiting New York City.

How dirty is this movie? We looked it up (all in the name of journalism) and the scenes seem to include fully naked women posing in sexual positions, dancing in the buff, touching themselves and each other, rubbing honey on themselves, taking a bath, and dressing in costumes.

You know, the usual stuff.

The blurb on the back of the VHS video reads: “From luxuriating in a warm, soapy tub, to reveling at an exclusive night club, Carol and Darlene bare their sex appeal and lead you on a sensual journey of discovery.”

Why does this even matter? 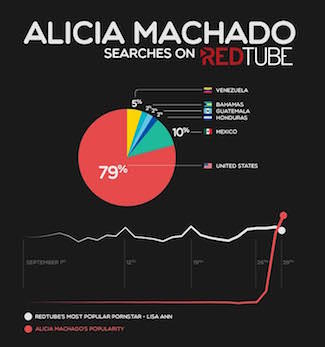 On Friday Trump went after Machado for an alleged “sex tape” — which turned out to be a grainy night-vision video of her in a risqué but not nude scene while appearing on a reality show.

“I mean, his latest Twitter meltdown is unhinged, even for him,”  Clinton said on Friday. “Really, who gets up at 3 o’clock in the morning to engage in a Twitter attack against a former Miss Universe?”

The barrage of tweets raised questions about whether or not Trump suffered from insomnia. The answer came quickly from Trump himself, again, on Twitter.

“For those few people knocking me for tweeting at three o’clock in the morning, at least you know I will be there, awake, to answer the call!” he wrote.