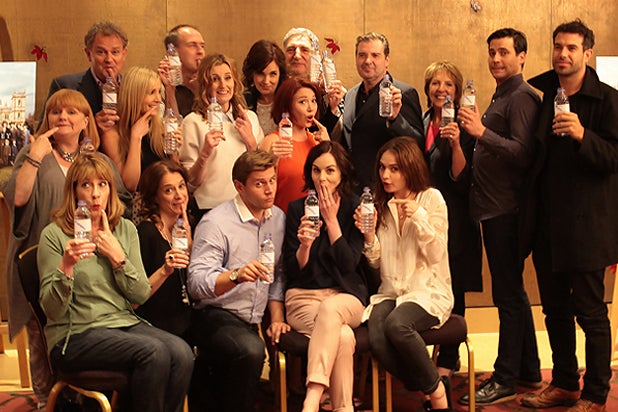 Who knew one little misplaced water bottle could create so much buzz?

After someone spotted a promo photo for the new season of “Downton Abbey” containing an anachronistic prop, it quickly went viral and now the cast themselves have weighed in.

“To support @WaterAid text WATER to 70007 to donate £3 #WH2Oops and go to bit.ly/wH2oopsDA,” Michelle Dockery, who plays Lady Mary on the show, posted to Instagram along with the above photo.

“After seeing the reaction the picture caused earlier this week, the cast and crew came up with the idea of turning some of this attention towards an issue around water that really matters,” an ITV spokesperson said in a statement. “They hope that by posing for this picture they will be able to raise awareness and amplify the work of international charity – WaterAid.”

Hugh Bonneville, Elizabeth McGovern, Tom Cullen are among Dockery’s “Downton” co-stars also featured in the photo holding water bottles and making “oops” gestures. Even the URL to the donation page for WaterAid features a self-referential wink to the PR boo boo.

“It brought a really big smile to my face when the cast of Downton Abbey said that they wanted to support WaterAid’s work, ” said Barbara Frost, Chief Executive of WaterAid. “How fantastic that the attention created over one water bottle ends up benefiting some of the world’s poorest communities through access to safe, clean water today.

“Every pound and penny WaterAid receives will be matched by the UK Government, which means we can reach twice as many people with desperately needed clean water and sanitation.”