Before the fireworks and lasers light up the Electric Daisy Carnival in Las Vegas this weekend, Tiesto and megaclub Hakkasan brought “the electric sky” indoors.

The veteran Dutch DJ was the test pilot for the Hakkasan Grid, a new large-scale art and light dome made from 57 intertwining sculptures that contort across the ceiling on Thursday night, the most substantial revamp since the five-story temple of EDM opened in 2013. 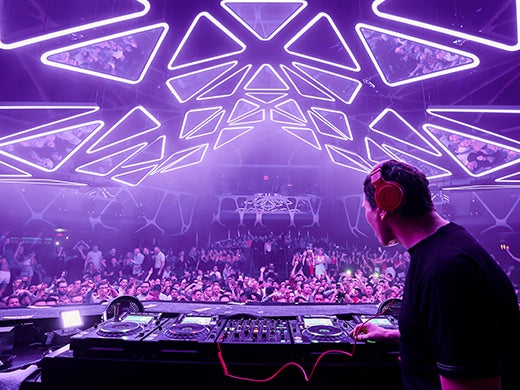 “Las Vegas is the party capital of the world, I love it here, and I consider it like home,” Tiesto told us before his set. “But, just as with a home you’ve been in for some time, you eventually want things updated. I’m excited to see how this new one-of-a-kind installation may be able to transform the room into something new and even more special.”

By morphing from a drone swarm to a glowing web, lowering in space and unfolding out to the edges of the room, I felt motion parallax – the disorienting feeling of moving while still. The setup the latest installment of optical illusions enhancing live dance music. Last month, producer Gesaffelstein “tricked minds” with the world’s blackest black at Coachella. WhiteVoid, a Berlin-based company with a Cannes Lion award on its resume, designed The Hakkasan Grid, which is now the largest permanent kinetic light installation in the U.S.

“I don’t really think about what genre is hot at the moment,” he said when asked about hip hop’s mainstream dominance at the moment. “I often mix genres and have been doing this for some time.”

Each electronic music year resets in May with EDC, Insomniac’s three-night, 240 act, 450,000 person rave at the Las Vegas Motor Speedway. Similarly, to the TV upfront, the Vegas clubs are reskinning and reloading before their most lucrative time of year: Memorial Day through Labor Day. That said, the timing of this reveal makes sense with the EDC and subsequent events in mind.

When the DJ who was to go on after Tiesto nudged into the booth at around the time that Tiesto’s set would usually wind down, Tiesto appeared to shoo him away and kept playing until just after 3 a.m.  For a room he’s played numerous times, Tiesto was clearly feeling refreshed with the renovation, and was reflected in his performance.

The new grid “took things to the next level,” as he said in a post to his 6.1 million Instagram followers.

Thank you @hakkasanlv for another incredible night! The new Hakkasan Grid took things to the next level ??”???”???”?