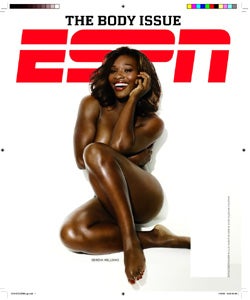 From a strict buzz standpoint, ESPN The Magazine’s “Body Issue” – featuring near-nude professional athletes like Serena Williams — was bound to be a success. And judging from the early returns, it’s exceeding the business rationale for the Disney-owned publisher, too.

At the Magazine Innovation Summit in New York on Thursday, ESPN general manager Gary Hoenig said that the "Body Issue" generated 400 new subscriptions to "The Insider" — its premium online content — in the two hours following its publication online.

I asked Hoenig how his answer to Sport’s Illustrated Swimsuit Issue is doing at the newsstand – he said it’s too early to tell, and even if he saw a spike in sales, “I’m not sure I’d believe it.” (Not that the "Body Issue" can touch SI’s bikini-clad franchise. An average issue of ESPN The Magazine sells about 20,000 copies, according to the Audit Bureau of Circulations; SI’s 2009 Swimsuit Issue, published in February, sold 875,000 copies.)

There were some other ESPN tidbits to trickle out of Hoenig’s session.

He said that last month ESPN.com had 28 million unique visitors, “thanks to the gateway drug that is pro football.” (Judging by the record ratings ESPN amassed by Bret Favre’s Hall of Fame performance against the Green Bay Packers, his former team, on “Monday Night Football,” it’s easy to see why.)

Hoenig said that the magazine’s controversial $1.00 annual subscription offer ("Is ESPN Comitting Publishing Suicide?") to its current subscribers generated a 30 percent response rate (seems low to me given the price-point, but Hoenig was pleased) and that they’ll benefit from auto-renewals.

He also made an interesting point regarding a growing problem in editorial morale: editors and writers who are constantly bombarded with the magazine industry’s scary numbers "perceive what (they) do is worthless."

Hoenig pointed this out after Gordon Crovitz, former publisher of the Wall Street Journal and co-founder of Journalism Online, boasted that in 2007, the incremental cost to fulfill a subscription to a digital edition of WSJ was 85 cents, with the price of an annual subscription at $99. In 1997, it was $8, and subscriptions cost $49.

“What’s missing here is what it costs to produce that content,” Hoenig said.

Later, Hoenig bemoaned the back-end technology that’s hindering the ideas for paid content models. “You have all these great ideas, and then you come to find out that the back-end of the company is situated in roughly 1978,” he said. “It turns out my company is not very good at this. I’m literally going from here to a meeting with a guy at ESPN to make this a priority. I’m going to Burbank to figure this out.”