Here’s something you can warn your eccentric uncle about this Thanksgiving: Russian trolls invading his Facebook page.

The social media behemoth is building a tool that will let users check to see if the pages they “like” are connected to nefarious, Russia-based users.

The social network announced on Wednesday the tool would highlight which pages were associated with the Russian Internet Research Agency — a Kremlin-tied organization that specializes in spreading disinformation. The IRA was instrumental in Russia’s leveraging of Facebook to meddle in the 2016 election; one IRA social advertisement showed Jesus and Satan arm wrestling, with Satan saying, “If I win Clinton wins!” (how creative).

“This is part of our ongoing effort to protect our platforms and the people who use them from bad actors who try to undermine our democracy,” said the Facebook blog post on the tool. “It is important that people understand how foreign actors tried to sow division and mistrust using Facebook before and after the 2016 US election.”

Facebook said the tool would be available by the end of 2017. Available from the Facebook Help Center, it’ll also show Instagram accounts that were run by the IRA. 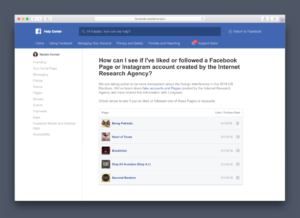 Earlier this month, Facebook General Counsel Collin Stretch told congressional investigators 146 million Americans saw Russian ads before and after the 2016 election. The IRA pumped out 80,000 pieces of content across Facebook and Instagram — a stark jump from the 3,000 Facebook had initially claimed. It appears Facebook’s IRA-checking tool won’t show ads that were paid for by the IRA.