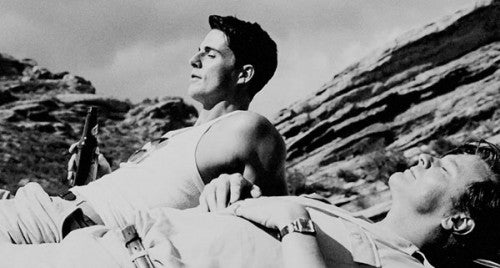 The movie stars Colin Firth as George, a soft spoken gay professor reeling from the death of his partner in a car accident. Despite George’s mourning period figuring heavily into the plot, it’s predominantly an exercise in style. Ford bathes George’s world in warm colors to express his heightened sensitivity to the poetic state of his despair.

Although the script occasionally falters, "A Single Man" is gentle enough in tone that George’s world feels instantly engaging, emotionally fragile, and always a wonder to behold. Like Julian Schnabel’s "The Diving Bell and the Butterfly," it uses cinematic imagery to reflect a recognition of beauty in sadness. George’s relationships with a former lover (Julianne Moore) and a pristine young student bring his fragility into sharp focus. Firth certainly seems like he’s headed straight into the Oscar race, which is probably music to Harvey Weinstein’s ears.

Considering that a wealthy celebrity of Ford’s stature could have made this movie with complete autonomy, its competence comes a welcome surprise. During a press conference today, Ford said that while he decided to try his hands at filmmaking after leaving Gucci a few years ago, he viewed his professional background as an entirely separate beast.

"I think a lot of people know me from my work as a fashion designer, which is very different than what I wanted to say as a filmmaker," he said. "It took me a while to figure out why anyone would want to see a Tom Ford movie." Nevertheless, he pointed out that working in another visual medium did provide him with a familiar reference point.

"Understanding the power of image, and how to tell a story with it, did help," he said. "But I’m not going to say there weren’t moments where I thought, ‘God, am I doing this the right way?’"

Firth expressed nothing but enthusiasm over his collaboration with Ford. "There are a million different ways you can be a wonderful director," he said. "If you’re working with a highly imaginative person with an extraordinary set of skills — which I think Tom already established — it’s nothing but intrigue from the beginning. A day or two into shooting, I realized that we had connected and harmonized in terms of what we wanted to do. I didn’t feel it was a huge leap of faith."

Oddly enough, Ford actually sounded humbled by Firth’s praise. "I’m so happy Colin took the chance with me," he said. "Fashion and film are two very different types of expression. Fashion is a commercially creative endeavor. Film is a purely expressionistic form. You want people to see what you do because that’s how you communicate with them. It was definitely the most personal thing I’ve ever done."