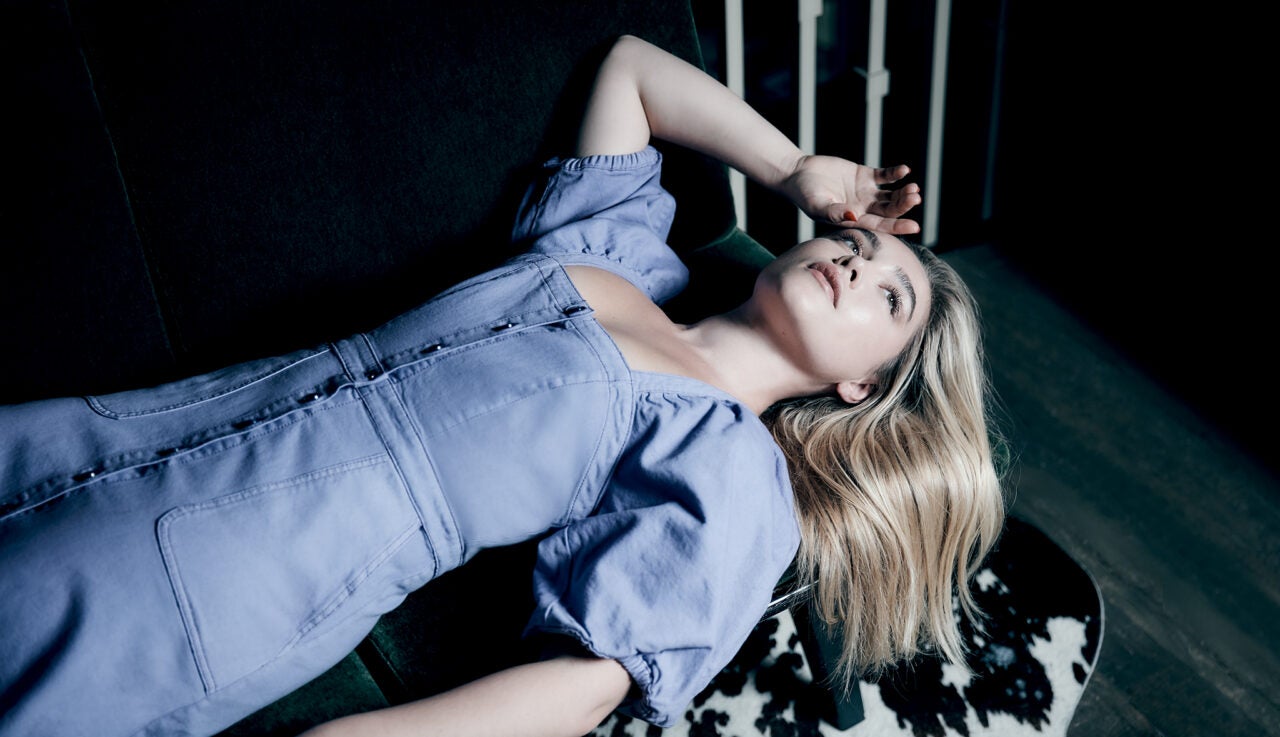 A version of this story on Florence Pugh first appeared in the Actors/Directors/Screenwriters issue of TheWrap Oscar magazine.

It’s a rainy day in downtown Los Angeles, and an upstairs lounge at the Ace Hotel is dark and moody. But the place brightens when Florence Pugh walks in — not just because of her puffy-sleeved white dress, but because the 23-year-old actress has has a lively, irreverent energy that befits somebody who’s had a crazy breakthrough year that found her starring in not one but three critically acclaimed films, including a pivotal part in Greta Gerwig’s eagerly anticipated adaptation of “Little Women.”

“She’s wildly, outlandishly talented and fascinating to watch and totally unafraid as an actor,” Gerwig said. “There is something about her that can’t be knocked down or overtaken, and that’s incredibly telling in a young woman. And I think it’s very exciting, too, to be with someone when they come into their power. She has a lot of power and she’s just starting to share it.”

Pugh may well be this year’s coolest breakout star by virtue of her performances in Gerwig’s celebration and deconstruction of the classic 1868 Louisa May Alcott novel as well as the unsettling summer horror film “Midsommar” and the Sundance pro-wrestling hit “Fighting With My Family.” But her rise has taken her by surprise. Four years ago, she was a teenager from Oxfordshire, northwest of London, who’d been acting in school since she was 6 but hadn’t started doing it professionally until 2014. Then she landed a role as a frustrated 19th-century wife in William Oldroyd’s bold “Lady Macbeth,” and suddenly the film world took notice. “It genuinely is an odd transition because you’ve been dreaming about it for so long, and you’re so busy that you’re not noticing it’s happening,” she said. “Every now and then, I pause to smell the roses and make sure I’m taking it all in.

Also Read: 10 Things I'm Thankful for This Oscar Season, From a Shorter Timetable to Joe Pesci

“Everybody has their own ways of getting into the industry, and no matter how you got there, it is a hard journey,” she added. “It’s also about doing what you can when you have that moment. And I think ‘Lady Macbeth’ was that moment for me.”

But no, what followed was not part of any master strategy. “We’ve been very selective over the years to make sure that all the characters I play are of interest — they are odd, they are weird, they have a message,” said Pugh, a gleefully outspoken type who clearly embraces her own quirks. “I’ve always felt passionate about that. I think maybe because of the things that I’ve chosen, it opens different doors, but there’s no big plan in place. It just happens.”

Still, playing widely varying characters in different genres and time periods has been a conscious decision for the actress. After “Lady Macbeth” won her the British Independent Film Award for Best Actress, she starred in Jaume Collet-Serra’s “The Commuter,” the 2018 BBC adaptation of “King Lear,” David Mackenzie’s “Outlaw King” and the TV miniseries “Little Drummer Girl.” “I find it tricky to imagine myself coming back to something again and again because right now, I don’t find that interesting,” she said.

That philosophy is certainly true of her wide-ranging work in 2019, beginning with her portrayal of WWE superstar Saraya-Jade Bevis (“Paige”) in “Fighting With My Family,” directed by Stephen Merchant. “I saw over 60 young actors for that role,” Merchant said. “It was very difficult — there’s a real woman on whom you’re basing the character, she’s been wrestling since 13, she’s working class, sarcastic, tough, but also sympathetic and charismatic. So I needed someone who could do those things and be willing to throw themselves around in a ring, and have the acting chops and the charisma to carry the movie. In the end, Florence was the one who could combine all of those things. It’s rare to find someone who is the whole package, especially someone who is so young.” 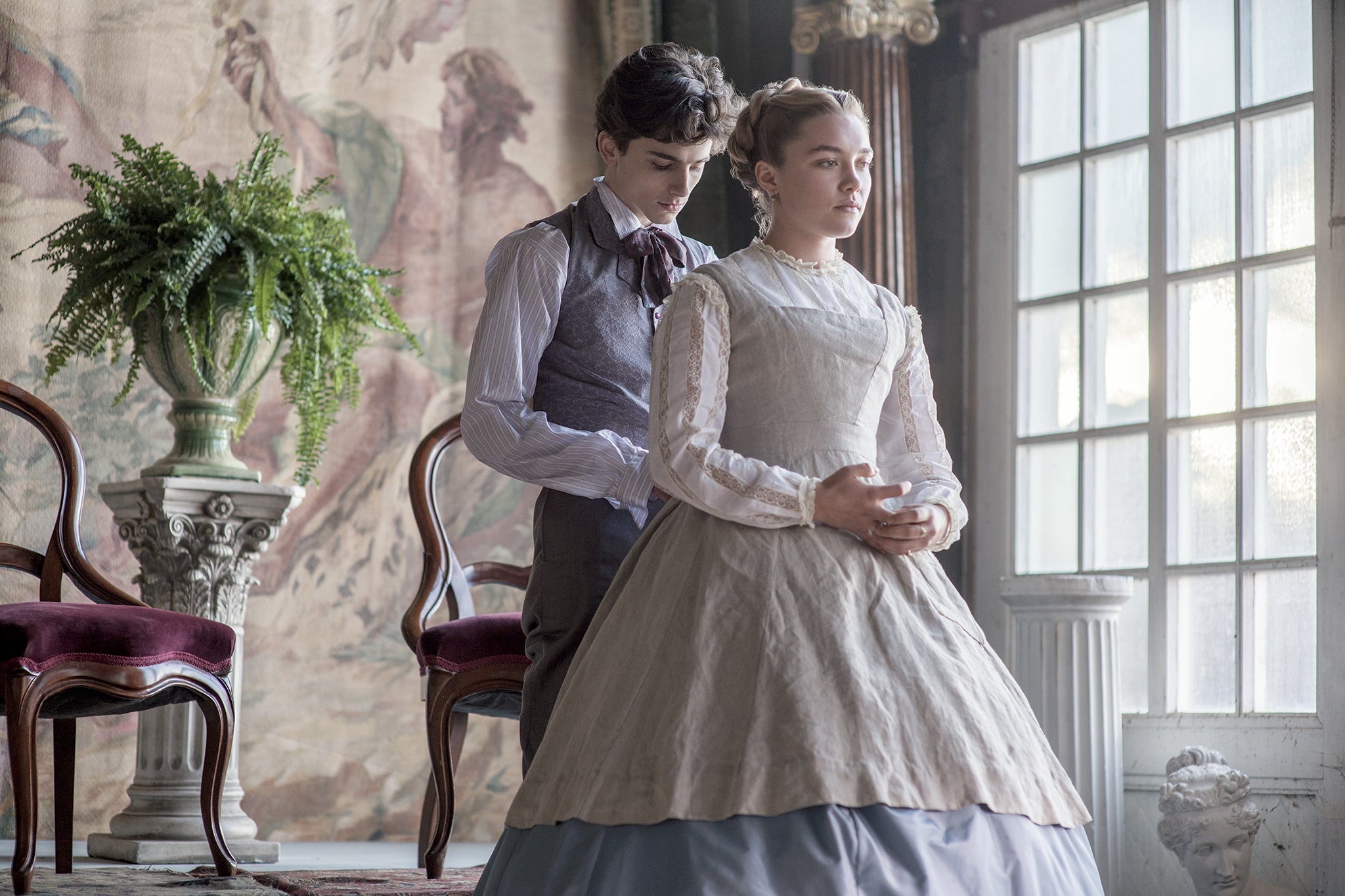 But that doesn’t mean that Pugh was confident she had what it took. “I’ve got a rule: All the films that I’ve done, I’ve been scared of,” she said. “I’ve been totally nervous about how it’s going to be, and if I’m going to be right for it. And this was obviously skyrocketing when I did ‘Fighting With My Family’ because I was playing Paige, the most-loved oddball in wrestling. She’s only a couple years older than me, and all this really wasn’t long ago and all the videos are still there. Everybody knows how she fights, how she moves and how she talks. That was terrifying.”

After she spent two months learning to wrestle, Pugh had to showcase her newfound skill in front of 20,000 people — 20,000 wrestling fans — in the first week of filming. She wanted to do right by Paige, her fans and her legacy in the WWE world, so she knew she had to go directly to the wrestler for advice. “We didn’t meet when we were filming — she had a neck injury and she couldn’t fly, and she was also on the other side of the world,” Pugh said. “But we would constantly chat, and I’d ask her a shitload of questions. And on the day of the match, I messaged her and I was like, ‘Hey, babe. So I’m about to do the thing that you did however many years ago and I’m naturally s—ting myself. Could you please just give me two things that I need to keep in mind?’ And she texts me back, ‘Walk out like you’re the boss, don’t give a shit about anyone. You are the most important person there. Beat the s— out of her.'” 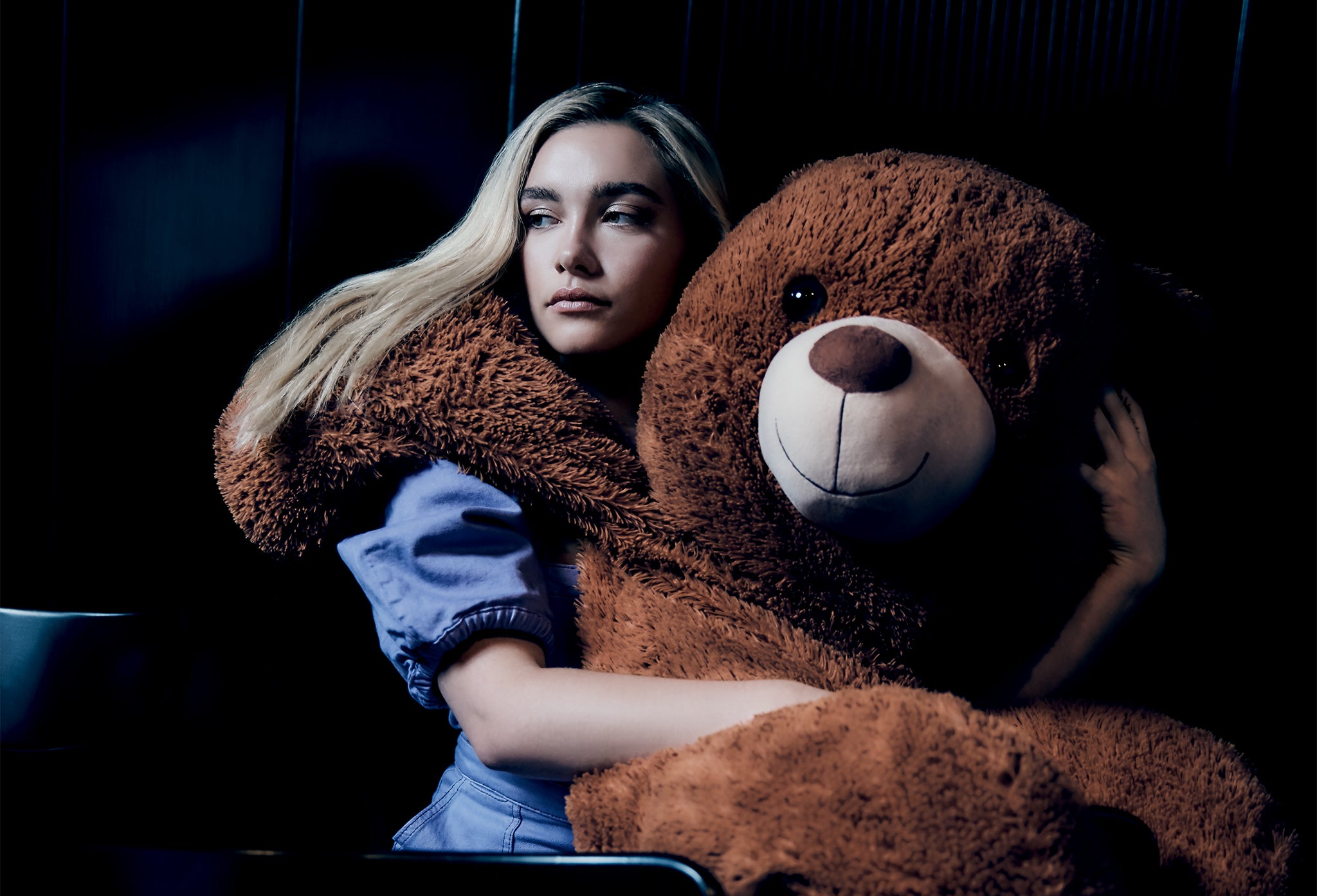 Plus, Dwayne Johnson, himself a former wrestler, served as a producer on the film. Pugh said that Johnson helped with run-throughs and taught her how to throw her whole body into a punch. “I was in the ring, looking at him and looking at all the seats around,” she said of rehearsing in a wrestling arena. “There are those magical, weird moments in your life when you just try and take everything in. I remember seeing all the seats and Dwayne trying to teach me how to punch, and I was like, ‘Oh, my God, this is a pinch-me moment that I should never forget.”

Johnson, for his part, hopes it’ll happen again. “I’ve had the pleasure of working with Florence on screen and I’ve had the pleasure of producing her off screen and I can’t say enough great things about her,” he said. “Florence has that real ‘it’ factor that we talk about in our industry — it’s hard to quantify and measure, but she has it. I love her to pieces, and hopefully we’ll work together again somewhere down the line.”

Also Read: WWE Superstar Paige on Having 'Fighting With My Family' Made About Her Life at 26: 'It's Definitely a Surreal Moment' (Video) After “Fighting With My Family,” Pugh was cast in the art-house horror film “Midsommar,” Ari Aster’s follow-up to the critically lauded “Hereditary.” Pugh played Dani, a troubled woman who, with her relationship on the brink of falling apart, goes on a trip to Sweden with her boyfriend and other pals to take part in a midsummer festival that quickly turns sinister and unnerving.

“I don’t like horror films, but I watched ‘Hereditary’ and thought, ‘I really want to be in the next one,'” she said. “When I read (the script), my biggest fear was that I shouldn’t do it because I’d never come close to grief like that before. I’ve never seen or felt that much pain. And I knew that’s the whole crux of this script, that this woman is on tenterhooks and she can break at any given moment. I just knew that you couldn’t fake that. Obviously the script was incredible, and any actress would want to play that, but I didn’t know if I could do that. But then I couldn’t imagine not doing it.”

“Florence is a remarkably versatile actress,” Aster said. “I was astounded to learn that she isn’t classically trained. She’s something extraordinarily rare: a true natural. Working with her was great. All I needed to do was provide her the space to follow her instincts.”

Because she at no point wanted to fake the grief her character had to feel, those instincts drove Pugh to imagine the funerals of her family members again and again during the making of “Midsommar.” “I know lots of actors will probably say, ‘That is really stupid,'” she said. “But in all honesty, I can’t cry on cue, and something like this role really needed for me to be in pain. I didn’t realize how raw it was until I watched it a year later. And I remember when I watched it, I was like, ‘Oh, that’s why you’ve been sad. Because you put yourself in this state, and then you didn’t fix it.'” 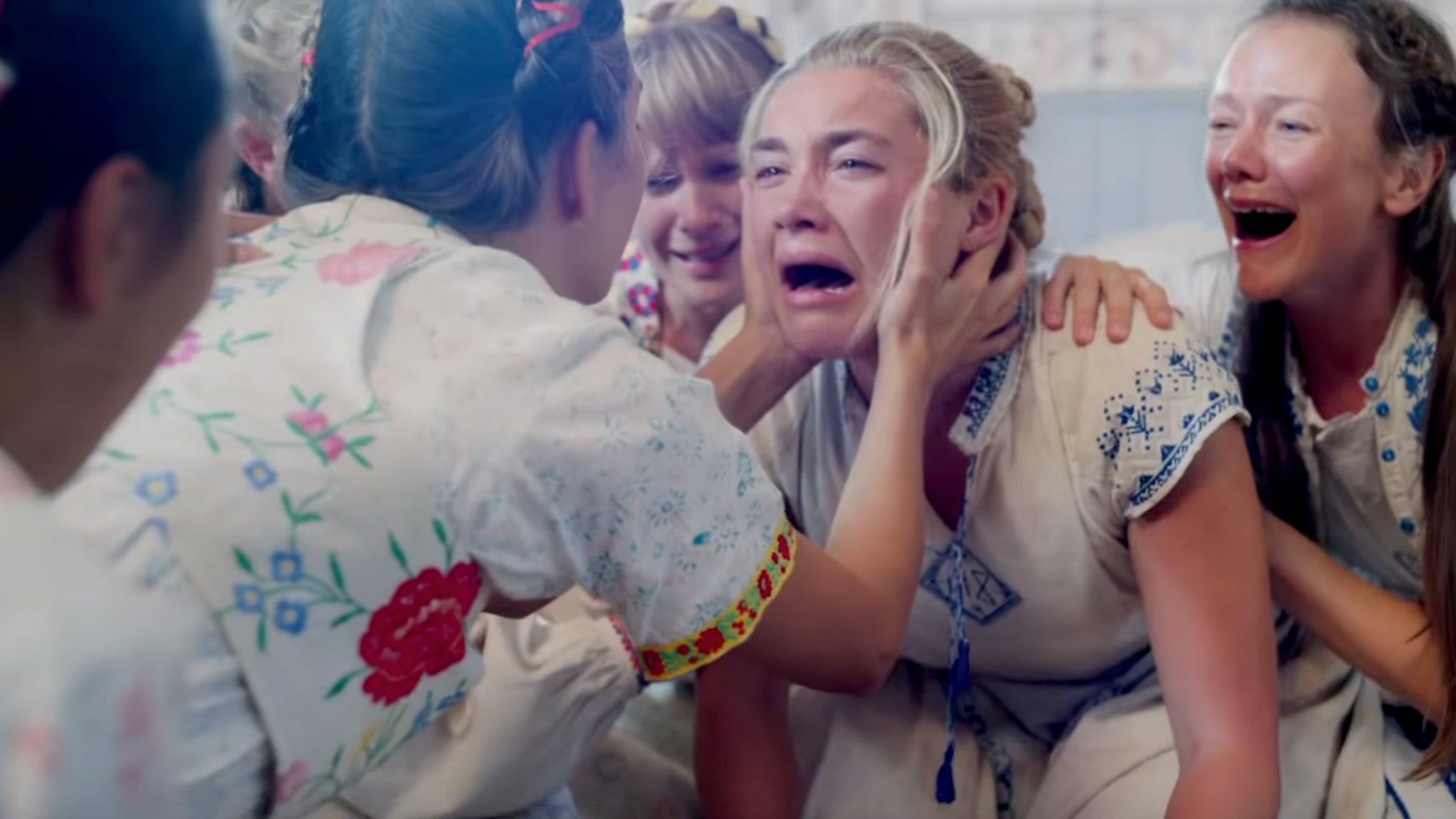 Only four days after wrapping production on “Midsommar,” Pugh jumped into a very different headspace to play bratty, tantrum-prone Amy March in “Little Women,” where her co-stars included Saoirse Ronan, Timothée Chalamet and Meryl Streep. When she first heard whispers that Gerwig was going to do the film, she knew the timing wouldn’t work with her “Midsommar” shooting schedule — but, she said, Gerwig, Aster and “Little Women” producer Amy Pascal “moved mountains” to make it work. (“When you know something’s right, you just make it happen,” Gerwig said.)

“Coming off ‘Midsommar’ straight into ‘Little Women’ was my version of therapy,” Pugh said. “I went from the most complex and emotionally tiring, exhausting thing that I’ve ever done to just being a 13-year-old, taking the piss out of Saoirse every two seconds, flirting with Timmy every two seconds, and playing and cuddling everyone on the set. It was actually the perfect way to balance who I was two weeks previous.”

Pugh especially welcomed playing a character that felt familiar to her — as she is to many fans of the novel. “There wasn’t anything that I needed to go do and prep myself on,” she said. “I’m already a bit of a big mouth. I already love telling people what’s what. To play Amy was just a joy because I could just let loose and be this very headstrong woman. Amy has been one of the most delightful and wonderful characters to play, and I loved her because she was easy — I knew exactly what she was. I knew that she was delicious and yummy and naughty, and then she grows into this woman who says how she feels so articulately. And I think nothing about that was daunting to me — everything about playing her was fun.” 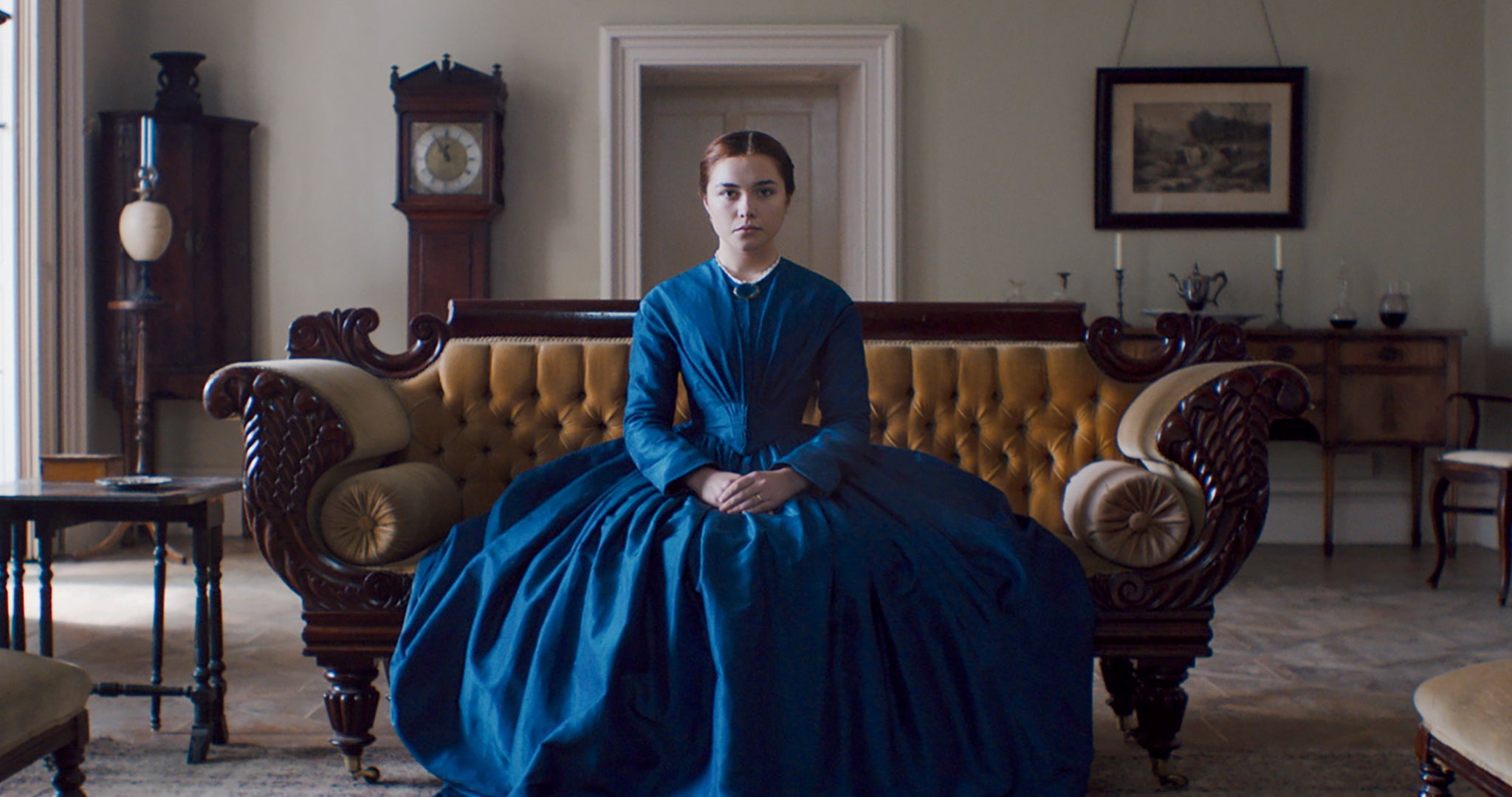 The fun continued with Pugh’s next project, this summer’s Marvel Studios movie “Black Widow” with Scarlett Johansson — another change-up from her recent run of onscreen roles. So what could be next for the budding movie star? Before heading back into the Los Angeles rain, Pugh admitted that there’s one genre she’s keen to take on.

Read more from the Actors/Directors/Screenwriters issue of TheWrap Oscar magazine.

The actress sits down for an interview and photo session