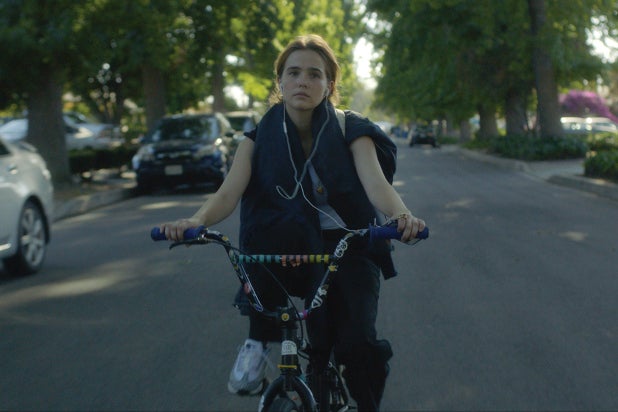 Max Winkler’s crass and disgustingly amoral “Flower” is a mess of a movie that plays as if it were pitched as “Juno” meets “To Catch a Predator.” Zoey Deutch, who plays the film’s anti-heroine Erica, looks and behaves so much like a lightweight mini-me version of Ellen Page that the connection to “Juno” would be there even if Erica hadn’t been written as a foul-mouthed variant on Page’s wised-up teenaged character.

“Flower” opens with the sound of heavy breathing, and we eventually see that 17-year-old Erica is fellating a cop to sexual climax. He asks her where she learned her oral skills, and she gives him a heavy look and says, “Middle school.” This line is obviously supposed to be humorous and “edgy,” but Winkler (the son of Henry Winkler of “Happy Days” fame) goes for his would-be laughs in such a hard-sell way that they almost never land.

Erica’s father is in jail for trying to rob a casino, and she is trying to earn money to make his bail by blackmailing the older men she services. When Erica is done with the cop, we see two of her young female friends filming him and calling him a pervert and demanding money from him. Winkler presents their cruel behavior as rebellious and righteous.

About 40 percent of Erica’s dialogue has her describing the male member or referring to it, and she enjoys drawing male penises in notebooks, but this obsession of hers just feels like a colorful character trait that has been hung on her, so to speak. Erica’s mother Laurie (Kathryn Hahn) has her hair pulled up in a ponytail with a cutesy scrunchie, and she wears bright red lipstick and hoop earrings, and this is supposed to signify that she’s trashy.

Laurie has invited her new boyfriend Bob (Tim Heidecker) to live with them, and Bob brings along his troubled son Luke (Joey Morgan, “Scouts Guide to the Zombie Apocalypse”), who is shy and overweight and has had an addiction to OxyContin pills. The extremely obnoxious Erica keeps offering oral sex to Luke, and he keeps brushing her off.

Erica walks in on Luke trying to hang himself, and Bob confesses that Luke was never the same after he accused a teacher of molesting him as a kid. Erica and her friends have been regularly ogling a guy named Will (Adam Scott) at a bowling alley, and it turns out that Will is the accused teacher. And so Erica accosts Will in a grocery store and sets herself up to get revenge for her stepbrother. “I deal with these sleazebags on the reg,” she tells Luke.

There are some movies that are misguided in a simple way, and then there are those rare unrelentingly awful movies like “Flower” that decide to go wrong in as many ways as possible in as short a time as possible. Erica is supposed to be a charmingly frank character, but she is actually a thug and a bully who sets in motion a criminal series of events that the movie treats as no big deal.

It’s hard to pick just which is the worst scene here, but it is probably the one in which Erica finally lets down her guard and gets all teary-eyed when her mother says that she can never keep a man because Erica chases all of them away. There are lots of different kinds of bad taste on display in “Flower,” but Winkler hits a new low when he has the temerity to ask for sympathy for Erica in this moment.

“Flower” starts out as a shrill and unfunny comedy and it progresses to being a morally repugnant social justice movie and then a road movie and then an unlikely romance, and none of these movies has even a trace of believability. In a way, “Flower” becomes slightly more bearable when it tries to be serious after failing so badly to be hip and funny, but embedded within the later dramatic scenes are desperately dumb plot decisions that lead us to a calamitous ending that beams with bent good will toward two characters who have done nothing at all to earn it.

Many movies are poor or poorly made, and they can be forgiven that. “Flower” is not forgivable because it is actively hateful and offensive, and not even the phrase “dark comedy” can begin to excuse that.