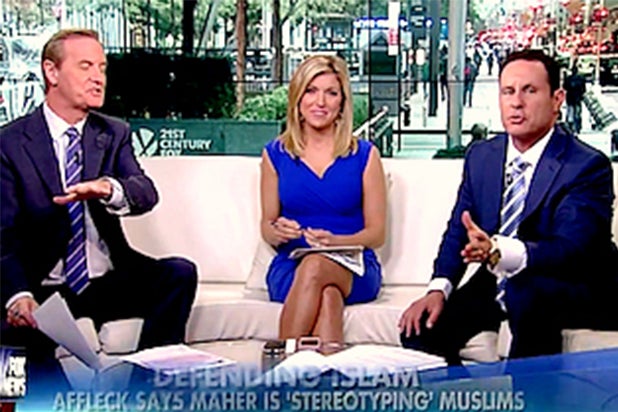 In what’s actually not part of a “Saturday Night Live” parody, one of the hosts of Fox News Channel’s morning show “Fox & Friends” agreed with Ben Affleck on a hot topic in the news.

During an appearance on HBO’s “Real Time with Bill Maher” on Friday to promote his new film “Gone Girl,” Affleck got into a heated debate with the host over whether or not Islam was by nature an inherently xenophobic and oppressive religion.

“It’s the only religion that acts like the mafia — that will fucking kill you if you say the wrong thing, draw the wrong picture, or write the wrong book,” Maher said.

“Hold on — are you the person who officially understands the codified doctrine of Islam?” Affleck replied. “[Your characterization] is gross and racist. It’s like saying, ‘Oh, you shifty Jew!'”

“Ben Affleck is right,” Kilmeade said. “Not every Muslim is out to get us.”

“Not every Muslim is an extremist,” added Ainsley Earhardt, who was filling in for Elisabeth Hasselbeck. “Which we all agree on.”

“Fox & Friends” has been a frequent target of “SNL” in recent years, with Kilmeade often being portrayed by actor Bobby Moynihan as the resident agreeable hanger-on.

Watch the video from “Fox & Friends” below.