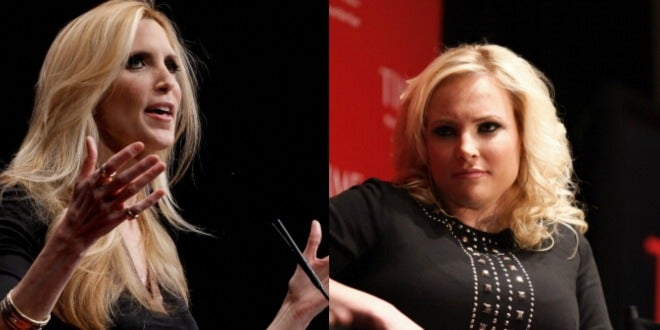 Fox News' Fox Nation site has pulled a post in which Ann Coulter jokingly called for Meghan McCain to be murdered.

Coulter facetiously recommended the murder of her fellow political pundit in the post published Wednesday. Fox News did not immediately respond to an inquiry from TheWrap about the post's removal or whether it was initially vetted.

"MSNBC's Martin Bashir suggested that Republican senators need to have a member of their families killed for them to support the Democrats' gun proposals. (Let's start with Meghan McCain!)" Coulter wrote.

As New York's Daily Intelligencer noted, Bashir didn't actually call for anyone to be killed. But that contention was quickly overshadowed by the comment about McCain, a past critic of Coulter's.

McCain took to Twitter early Thursday to respond to Coulter.

"Apparently Ann Coulter made a joke about me being killed in a recent column. I should expect nothing less but disgusted regardless," she wrote in one tweet.

"My father is a very famous politician. My family gets a lot of threats. Joking about me being killed really isn't funny or appropriate," McCain added.

She also wrote: "A little perspective this morning. People like Ann Coulter are part of the past and only live to spread hate and negativity. I literally couldn't imagine living a life that seems so void of love, compassion, and perspective. Basically I get to wake up every day wanting to make this world a better place and people like her want to make it a worse place. I feel blessed to have not grown to be a person like that."

Meghan McCain's mother, Cindy McCain, added, "Ann Coulter, have one of your family members threatened. See how you feel!"