Director Francis Ford Coppola has collaborated with the UCLA School of Theater, Film and Television on an experimental workshop production designed to test Coppola’s audacious plans for a medium that will combine elements of film, television, theater and live sports.

The month-long workshop project, which UCLA graduate Coppola showed to private audiences on Friday night and announced at a press conference at UCLA on Saturday morning, used student actors and UCLA student and faculty crew members to create a live 27-minute film, “Distant Vision,” excerpted from a lengthy Coppola script about three generations of an Italian-American family.

The script was performed straight through late Friday afternoon in the Freud Playhouse at UCLA, on a stage that included removable walls, green screens and a state-of-the art control center from which Coppola chose from up to 40 different camera feeds, some following the action live and others incorporating pre-taped segments.

Created in real time and lighted to look more like a movie than a typical live TV performance, “Distant Vision” was broadcast to private gatherings of Coppola’s friends and colleagues in several cities around the world, but will not be shown publicly.

Coppola had done a small-scale test of the process he calls “live cinema” in Oklahoma City, but the UCLA workshop was his first real attempt to see if it was possible to pull off the risky venture. “I felt the need to experiment in order to learn the actual methodology of live cinema, which is a hybrid of theater, film and television,” he said in a statement.

“The shot is the basic element, as in film; the live performance is from theater; and the advanced television technology to enable it is borrowed from TV sports. It is very exciting to work in.”

It is also enormously ambitious and complicated to pull off Coppla’s vision of moviemaking without postproduction, cinema that can be accomplished live and viewed as it happens.

Coppola and UCLA TFT dean Teri Schwartz showed off clips from the making of “Distant Visions” at the press conference on the UCLA campus on Saturday. More than 75 UCLA students and faculty from the film, television and theater departments worked on the project for a month, with extensive and meticulous planning necessary to work out camera moves and set reconfigurations. 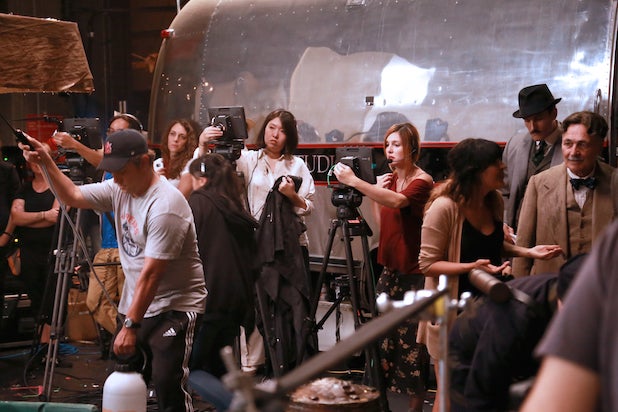 The workshop was co-sponsored by Coppola’s production company, American Zoetrope, and UCLA TFT.

“It is our greatest honor to warmly welcome our most treasured alumnus Francis Ford Coppola back to his alma mater,” said Schwartz in the release. “Francis has amazed and enthralled all of us — students, faculty and staff — with his fearless and bold mastery of visual storytelling at its deepest and most transformational state. We thank Francis for this magnificent opportunity for our students to work alongside him as he takes cinema into a very exciting and inspiring future.”