There’s a phenomenon going on in LGBT visibility right now that we might call the New Timidity; it’s one thing to hear the usual hate speech from the likes of Kim Davis and Rick Santorum, but even community allies seem to be hedging their bets, worrying about what straight people might think and standing guard against anything or anyone who might be “too” gay.

In the last week or two, we’ve had “Stonewall” director Roland Emmerich‘s admitting to giving his film a “straight-acting” hero to attract mainstream audiences, followed by Matt Damon‘s admonishment that non-hetero actors need to embrace a sense of public mystery (even through straight performers are never told to leave their spouses off the red carpet).

Now comes “Freeheld,” another true story about an important landmark on the road to LGBT equality in this country. While it’s an undeniably powerful film, it also seemingly feels the need to tread carefully — for a story that’s ostensibly about two lesbians, the script by “Philadelphia” writer Ron Nyswaner (based on Cynthia Wade’s documentary) spends an awful lot of screen time on Michael Shannon as a straight guy who learns that gay people are OK, and that discrimination is bad.

If that trajectory sounds familiar, it’s because Denzel Washington traveled a similar path in Nyswaner’s 1993 hit. But while straight audience members might have needed an avatar and a guide through this kind of material 22 years ago, such hand-holding feels oddly quaint and old-fashioned at this point, as though non-gay moviegoers were still tentative about these kinds of characters.

It’s a new world, and the lesbians are played by Julianne Moore and Ellen Page, so “Freeheld,” frankly, suffers when it gets distracted from its ostensible leads and their story: Moore plays Laurel Hester, a much-decorated New Jersey cop who’s so deeply closeted that she drives all the way to Pennsylvania just to play volleyball (which she’s terrible at) with other lesbians. It’s there that she meets the much-younger mechanic Stacie Andree (Page), and despite their differences in age and geography, to say nothing of Laurel’s guardedness about her private life, the two get together to pursue their shared dreams of a house and a dog of their own. 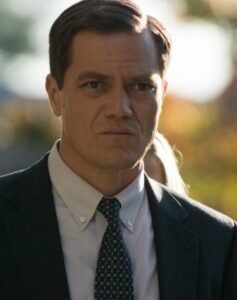 Then Laurel gets cancer, which makes her want to leave her police pension to Stacie so that her spouse won’t lose that house. Since it’s 2005, the most legal recognition the two can get is a New Jersey domestic partnership, but a loophole allows the county’s Board of Freeholders to vote to deny Laurel’s request. A protracted battle ensues, with flamboyant out-of-town activist Steven Goldstein (Steve Carrell) swooping in to fight for a cause that he sees as crucial in the ongoing battle toward the legalization of same-sex marriage.

It’s a lazy critical tic to compare any female-centric film to a Lifetime movie — and “Freeheld” stacks the deck by being about both social injustice and cancer — but what we have here is actually closer to the issue-oriented films of Stanley Kramer (“Guess Who’s Coming to Dinner,” “Judgment at Nuremberg”), in both good and bad ways. Kramer always got great work out of his actors, as director Peter Sollett (“Nick and Norah’s Infinite Playlist”) does here, but Sollett also shares Kramer’s on-the-nose-ness when addressing the need for societal change, keeping the visuals and the editing thuddingly mundane lest they distract from the messaging.

Moore and Page make an engaging couple, even though at times they almost look like mother and daughter. (When we are shown photos of the real Laurel and Stacie at the end, we see that the real women came off that way as well.) Laurel starts out tough and stoic, but we see her (and her crispy Farrah Fawcett hairdo) soften, first under the influence of love and then because of the cancer.

Page’s portrayal of a woman helpless to save her wife carries real power, but she’s forced to sacrifice much of the film’s second half to Shannon, who’s just fine as Laurel’s work partner Dane Wells; once we’re vested in the relationship between the two women, it’s distracting suddenly to focus on Dane’s coming around to Laurel’s cause and then rallying fellow policemen to do likewise.

Certainly bound to be controversial is Carrell, who comes giddily bounding into this drama as though from another universe — that’s precisely the point, though. For people like Laurel and Stacie who were no one’s activists and just wanted to keep their heads down and live a quiet, discreet life, this boisterous, out-and-proud pot-stirrer would no doubt seem completely alien.

The real-life story of “Freeheld” is moving and stirring enough to carry over the film’s tendency to coddle its straight audience’s perceived inability to be outraged over Laurel’s plight. Had the filmmakers given 2015 viewers a little more benefit of the doubt, it probably would have been to the movie’s benefit as well.