Judd Apatow and Michael Bonfiglio have created the extreme fan-boy documentary of counterculture comedian George Carlin’s life, times and personal struggles. It’s jam-packed with juicy bits, particularly highlights of Carlin’s memorable routines like his timeless riff on environmental doomsayers: for decades, he joked that “the planet is fine,” people not so much (“the planet will shake us off like a bad case of fleas”). Hilarious, driven, able to change with the times, obscene, the wiry Irish Catholic New Yorker appeared 130 times on Johnny Carson over a fifty year career, and inspired comedians from Chris Rock to Stephen Colbert – and, of course, Apatow.

Born in Manhattan in 1937 and dead from long-term cardiac problems in Hollywood in 2008, Carlin gets the behind-the-music treatment. His heavy-handed father was a loquacious drunk. The W.C. Fields lookalike beat George’s older brother Patrick (also featured in the doc); their battered mother stole the boys away in the dead of night but she, too, is portrayed in a darker, controlling light, as someone the comedian needed to escape in order to express himself.

In 1961, he was fortunate to meet the first love of his life, Brenda Hoswick, at a Dayton, Ohio club. Weeks later, they wed and hit the road, with Brenda supporting the then-unknown comic’s dream to succeed as a stand-up. She stood by him from the suit-and-tie clean-shaven era to the beard-and-long-hair hippie years and beyond. 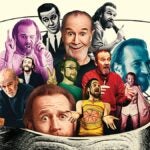 In 1963, the couple had Kelly, who appears here extensively and has an executive producer credit. According to their only daughter, her parents were deeply in love and dangerously codependent. As Carlin’s career ascended, his need for his wife as publicist-manager-factotum waned. A bored housewife, alone with Kelly in Los Angeles while George toured, Brenda became a raging alcoholic to George’s cocaine fiend – a habit that did not help his genetic heart problems.

Kelly gives the documentary its Oprah moments, fighting back tears as she discusses the fraught triangle that was their small family – and the burdens placed on her from a young age to be the only adult in the room. Carlin’s older brother Patrick, who sometimes appeared alongside George onstage, also chimes in, wearing a 420 T-shirt, offering more wry and rough insights into his famous sibling.

Apatow has mad access to comedians, and assembles a comedy all-star panel of (predominantly white male) talking heads: Jerry Seinfeld, Patton Oswalt, Colbert, Rock, Jon Stewart, Steven Wright, Bill Burr, W. Kamau Bell, Bette Midler and Judy Gold. Most of their comments are adulatory, which is fine on a certain level. I consider myself a Carlin fan, having stayed up late to catch him on Carson as a kid, and relishing his radical anti-establishment take-downs alongside Mort Sahl and Richard Pryor. But even I was looking for a few critical perspectives, a view with an edge.

Perhaps “George Carlin’s American Dreams” was always intended to be a four-hour two-parter. Apatow tends to be self-indulgent in length (“The King of Staten Island” would have been much better at 90 minutes than 136, for one of many examples.) Did someone say, ‘hey, we have enough material for two movies’? The answer is, yes, there’s plenty, but that doesn’t mean you should use them all.

The four hours are often repetitive, a funny riff delivered by Carlin onstage echoed when he gets serious opposite the now-disgraced interviewer Charlie Rose. It’s hard to cut a name act like Seinfeld but, as a talking head, he’s just not that insightful about anybody but himself.

The strongest moments are always Carlin’s act, particularly in the final hour as he honed his prescient political comedy and found and sharpened his voice yet again for a new generation. He had the ability to change with the times, and the longevity and impulse to impact social change by shouting truth to power. As much as this documentary connects the dots, the best Carlin trove can also be found on HBO Max, streaming the many HBO Original specials like “It’s Bad For Ya,” “You Are All Diseased” and “Jammin’ in New York.”

“George Carlin’s American Dream” debuts on HBO in two parts on May 20 and May 21, and will be available to stream on HBO Max May 20.