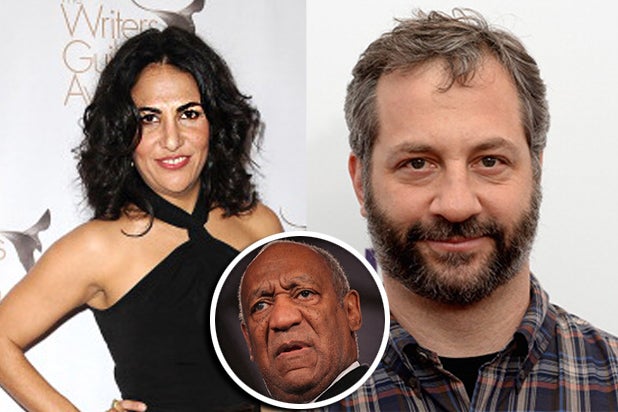 This, after “Black-ish” creator Kenya Barris slammed the “Knocked Up” director for being “strangely obsessive” about the comedian’s sexual assault scandal.

“[Barris] was like, ‘You’re obsessed,’ and I was like, ‘Um, I wish more people were obsessed with a rapist [who assaulted women] when they were unconscious,'” Konner told HuffPost Live. “I thought it was insane. I wish that everyone was as obsessed [as Judd is] with the idea that [Cosby] should not be working and not be getting paid to work.”

Last month, Apatow criticized Cosby on Twitter after more than 20 women accused the embattled comedian of raping, sexually assaulting or drugging them.

Apatow also took aim at a couple of venues that had not canceled the 77-year-old’s stand-up appearances.

Every single theater that allows Cosby to perform should cancel the performance. There is no justification to allow him to perform.

Barris then questioned why the director singled Cosby out and didn’t use his social media platform to speak out against other issues, such as the deaths of Michael Brown or Eric Garner.

“I mean ur a comedy god but u have an extremely narrowband and privileged scope for ur powerful rage,” Barris tweeted.

Cosby was also the subject of debate during the premiere of NBC’s “Celebrity Apprentice.”

On Sunday, executive producer and host Donald Trump weighed in on “Cosby Show” alum Keshia Night Pulliam’s decision not to call on her TV dad for help during a challenge.

“This show was taped just before the terrible Bill Cosby revelations came to light. She still should have asked him for money-goes to charity,” Trump tweeted about Pulliam’s decision.

“She has known for years that he is an awful person. Accusations started in 05,” wrote the “40-year-Old Virgin” director.

Cosby hasn’t been charged with any crimes stemming from the allegations. But the fallout prompted the cancellation of a Netflix special, caused NBC to drop a comedy series that was in the works, and has led to several of his shows being canceled.