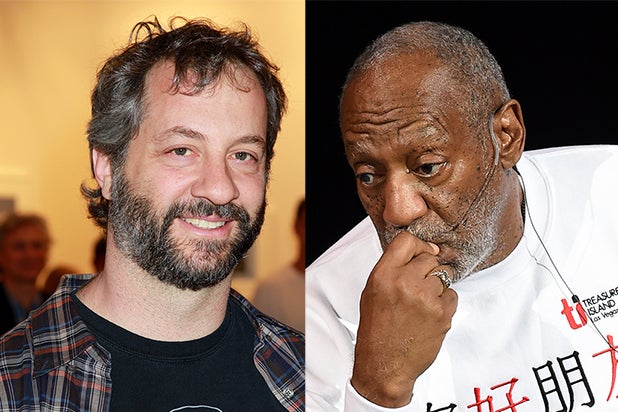 Producer-director Judd Apatow used Twitter to blast Bill Cosby on Friday after first calling out two Canadian venues where the comedian, accused of rape by multiple alleged victims, is scheduled to perform in January.

“Are you really going to let Bill Cosby perform on your stage January 7?” Apatow tweeted at Toronto’s Centre in the Square.

“You too @BudGardens Jan 8?,” he wrote to another venue. “Is Cosby only popular in Ontario Canada at this point? Do people still find him delightful after 30 accusers?”

The venues’ Twitter accounts have yet to respond to Apatow’s question, though many other users have.

Twitter user “woofmachine” asked Apatow whether it was fair to prematurely judge Cosby, pointing out that most people are presumed innocent until proven guilty in a court of law, whereas the comedian hasn’t even been charged with a crime.

“[Cosby] should speak publicly about how false this all is,” Apatow replied.

The “Knocked Up” director called for “30 alibis” in reference to the dozens of women who have accused Cosby of rape, drugging or sexual assault over the course of several decades, with many of them only coming forward in recent weeks.

Apatow, who recently called out the media for its coverage of the Sony hack, is well known for voicing his opinions on social media. But user “mikeandrewb” wanted to know why the director is “obsessed” with talking about Cosby in particular.

“I guess it’s because guys who rape a lot aren’t cool,” Apatow responded.

As allegations against Cosby have mounted in recent months, his public profile has deteriorated. Netflix pulled its stand-up comedy special, TVLand has yanked reruns of “The Cosby Show” and many of his scheduled performances have been postponed or altogether canceled.

But the website for the Toronto venue still lists Cosby as performing on Jan. 7. So, too, does Budweiser Gardens in London, Ontario.

Neither venue has responded to TheWrap‘s request for comment, but Centre in the Square did address similar concerns back on Nov. 24 in a blog post called “Why Isn’t The Centre Cancelling the Cosby Show?”

“This is a rental show,” the post said, “and CITS is contractually obligated to move forward with the show unless it is cancelled by the external promoter.

“While we may personally share concerns raised by the community,” the post continued, “if The Centre forces a cancellation of this rental show… the Centre would need to pay any guarantee fee contracted to Mr. Cosby… compensate the promoter for any losses… and… refund patrons. For these reasons we will continue to discuss options with the promoter.”

Neither Apatow nor Cosby have responded to TheWrap’s request for comment, either, but you can view Apatow’s Twitter exchanges below:

so @Centre_Square – are you really going to let Bill Cosby perform on your stage January 7? — Judd Apatow (@JuddApatow) December 27, 2014

“@mikeandrewb: @JuddApatow @Centre_Square and ur obsession is because…?” I guess it’s because guys who rape a lot aren’t cool. — Judd Apatow (@JuddApatow) December 27, 2014

“@woofmachine: @JuddApatow @Centre_Square innocent until Proven”. He should speak publicly about how false this all is. 30 alibis. — Judd Apatow (@JuddApatow) December 27, 2014

You too @BudGardens Jan 8? Is Cosby only popular in Ontario Canada at this point? Do people still find him delightful after 30 accusers?

“@deluded_jim: @JuddApatow @BudGardens well at least the heckling would be entertaining?” One can only hope Cosby will need that skill now.