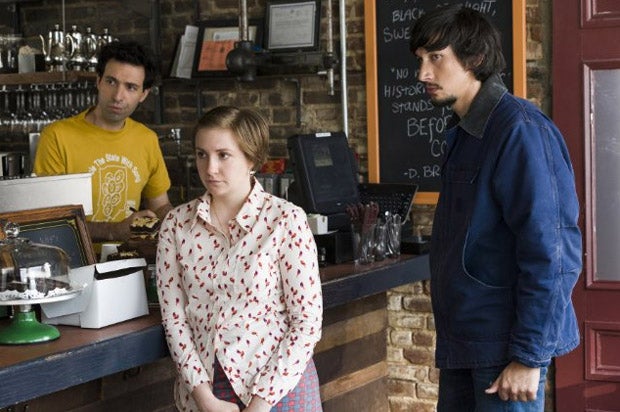 “Girls” is back, and it’s just as messy, funny and offbeat as ever.

Oh, and there’s still plenty of casual nudity, in case you were worried about that.

Lena Dunham‘s HBO comedy ended last season on an almost unbearably conventional note — remember sweetly thugish Adam (Adam Driver) racing through the streets of Brooklyn shirtless to rescue Hannah (Dunham) in the middle of an OCD meltdown and Marnie reuniting with Charlie? Critics and fans alike fretted that Dunham was going soft in the head.

Or, worse yet, overly mainstream.

Almost to confirm those fears, the new season opens on a romantic note, with a scene of Adam and Hannah happily cohabitating. Luckily, the bliss doesn’t last long.

When Adam stops by Ray’s coffee shop to get a key from Hannah, his ex-girlfriend (Shiri Appleby) and pal (Amy Schumer) light into him, and then Hannah, while Ray laughs in the background. Their attack is over the top, extremely awkward, and very funny.

From that moment, order is restored in the “Girls” kingdom. There were no happy endings last season, just happy moments.

We learn that Charlie unceremoniously broke up with Marnie (Allison Williams), and she is shacking up with her mother while she continues to seek creative fulfillment and employment she knows she deserves. Jessa (Jemima Kirke) is in rehab causing trouble, and Shoshanna (Zosia Mamet) is sowing more wild oats post breakup with Ray (Alex Karpovksy, ever sardonic) in between fitful studying.

See video: Lena Dunham Explains Relationship With HBO: ‘Which Item of Clothing Would You Like Me to Remove?’

As for Hannah’s much-obsessed-about e-book: Well, things seem to be going much better with her editor (a droll John Cameron Mitchell), but its status is thrown into question due to an unexpected development that brings out Hannah’s worst tendencies.

Dunham has never shied away from her character’s extreme self-absorption, instead pushing it to awkward extremes. Like Larry David‘s alter ego in “Curb Your Enthusiasm,” Hannah says things people might think – what does this bad thing for you mean for me? – but usually don’t articulate.

Her guilelessness knows no bounds, and in coming episodes, those around her call her out on her self-absorption and callous behavior. This prompted her to defend herself, and perhaps the show at the same time.

Hannah’s close friend Jessa also has a tendency to say things that most are socially conditioned to keep to themselves, but her motivation is murkier (boredom, impatience). And it, along with other transgressive behavior leads to her getting kicked out of rehab.

“You have to learn when it’s a party trick,” fellow rehabber (Richard E. Grant) advises Jessa when she defends her truth-telling.

Hannah must face other relationship challenges beyond Adam’s angry ex: His troubled sister (Gaby Hoffman) arrives; like many a guy, he doesn’t want to spend time with her friends.

Dunham’s willingness to really delve into how female friendship evolve and change in adulthood is one of the show’s biggest strengths. Once the provenance of women’s magazines, the subject is under-explored on the big and small screen. Dunham also continues to explore how the artistically inclined navigate life after college, lightly nailing their snobbery and aspirations.

Her fascination with all things awkward does lead her astray upon occasion, however. Must she really clothe Hannah in so many frumpy outfits? Would Hannah really continue to be that clueless about how to dress herself more flatteringly? We get it: Clothes don’t matter to every woman, and not every woman is conventionally attractive. But there are times when the wardrobe decisions seem deliberately unattractive.

Same goes for unflattering camera angles. One lingering shot of Hannah lying down in the woods, for instance, seems designed to show an extra fleshy curve of Dunham’s inner thigh. It’s way too studied to seem natural. Dunham and Williams’ acting occasionally falls flat, too.

But overall, the season gets off to a very strong – and interesting – start. The writing is deepening along with the relationships depicted.

Haters may hate, but “Girls” has really grown on me: Once I watched it with one hand over my face; now I eagerly look forward to watching it with eyes fully on the screen.