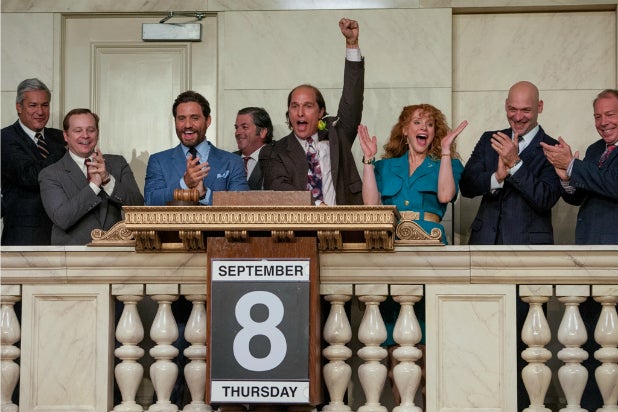 Alfred Hitchcock famously insisted that no one be seated in “Psycho” once the movie had started, lest they get to the famous twists without being fully invested in the story. The producers of “Gold” should consider stopping people from leaving the theater midway through, since the film so craftily changes directions that it transforms from a movie you don’t want to see into one that you do.

It’s not that the first half of “Gold” isn’t well-made, but it ambles along like a completely unironic “Wolf of Wall Street,” showing us a hardscrabble Nevada mining company beset by the 1980s recession before gambling everything on a gold strike in Indonesia. Yet while the movie seems to be merely another celebration of grasping capitalism and dick-swinging contests of masculinity, it’s got far more up its sleeve.

Matthew McConaughey (who also turned up in “Wolf,” come to think of it) stars as Kenny, a third-generation miner in Nevada; his grandfather had a mule and a wheelbarrow, while Kenny and his father (Craig T. Nelson) have a slick office where everyone’s on the phone all day but no one has to get their hands dirty. As the film jumps from 1981 to 1988, we see that economic times are tough; the patriarch has died, the company’s in debt, and all the employees are making their phone calls from the bar where Kenny’s girlfriend Kay (Bryce Dallas Howard) waits tables.

Desperate times call for desperate measures; Kenny remembers meeting geologist and gold-chaser Mike Acosta (Édgar Ramírez), who has a theory about a “ring of fire” where tectonic plates in the Pacific Rim rub up against each other to create a bounty of valuable minerals. Kenny digs up his literal last dime (stealing and hocking Kay’s gold watch to help pay for the trip) to travel to Indonesia to convince Mike to go into business with him.

At first, their dig deep down the river seems futile, and Kenny comes close to dying of malaria. But then they strike it rich, leading to interest from Wall Street and untold riches all around. That “mo’ problems” come next should be no surprise, but how “Gold” unfolds — and how what seemed like a celebration of wealth and exploitation retroactively becomes bitingly satirical — makes for captivating viewing.

Director Stephen Gaghan (“Syriana”) knows his 1980s tropes well, with we’re-in-the-money montages and corporate masters of the universe indulging themselves in all the hot tubs and cold champagne they can grab. (His taste in ’80s music is a little too cool for the room, though; guys like Kenny probably weren’t listening to Richard and Linda Thompson, even if the soundtrack says otherwise.) It’s anyone’s guess how much truth is contained in the “Inspired by True Facts” screenplay by Patrick Massett and John Zinman (“Lara Croft: Tomb Raider”), but they skillfully change the narrative and the tone around every corner.

It’s easy to see why McConaughey wanted to play this sweaty striver: Kenny may be balding and paunchy, but he’s got a pitchman’s slick patter every time he’s backed against the wall. (The actor’s hairline remains consistent, but his fake potbelly seems to come and go from scene to scene.)

Ramírez conveys the calm intellect of a man who can spew geological facts one minute and then calm down gun-waving Indonesian soldiers the next, but Howard’s Kay gets little to do. She’s supportive until she isn’t, and her main character trait is that she doesn’t know what to do with her hair. (No lie: Kenny cheats on her with the first decently-coiffured woman who turns up on camera.)

“Gold” contains what may be one of the year’s best final shots; not only is it well-earned by that point, but it also doesn’t tell you how to react to it. It’s a movie that both understands the basic desire to strike it rich and our deep understanding that one person’s wealth often comes at the expense of another person’s well-being. This isn’t a perfect movie, but it’s admirable for its ability to keep more than one thought in its head at a time.

Scarlett Johansson and Seth MacFarlane also posed with their characters

The upcoming 3D animated film "Sing" tells the story of a koala named Buster Moon who holds a singing contest to save his theater. Here are the film's animated superstars, and the struggling Hollywood nobodies who provide their voices.