Frears, Judi Dench, and Steve Coogan at the top of awards season, in Venice.

On “Oscar-nominating-ballots-due-eve”, the American Cinematheque hosts a tribute to the director of “The Queen”, “The Grifters”, the forthcoming Lance Armstrong biopic, and his Globes, SAG, and Critics Choice nominated, “Philomena.”

House of Blues, West Hollywood
It’s not just “12 Years a Slave,” “Fruitvale Station,” and “The Butler.” The BFCA’s Joey Berlin and Sam Rubin (co-Executive producers of this first time event) note that 40 notable films opened in 2013 primarily written, directed, and/or produced by black men and women. Stars of the doc “20 Feet From Stardom” will perform.

Audi’s Golden Globes Cocktail Party
7 p.m. Cecconi’s West Hollywood
The Dan Tana’s of awards week parties – classy, crowded, and consistent. No more Sunday night scheduling for this staple that is a near carbon copy of their pre-Emmys party at Cecconi’s. Four nights later its still a kickoff, but now for the actual weekend. This always draws well.

Bradley Cooper and Matthew Weiner at the AFI Awards Luncheon 2013.

If your favorite part of the Globes is the five-second commercial bumpers of celebrity B-roll of intra-table mingling (or any event for that matter), you’d be crazy to sit and eat at this one. On your feet … everyone.

The highest population density of creative star power in a tiny room,  singling out no one individually but rather the “collaborative nature of our industry” and the “community’s creative ensembles as a whole,” this huddle has the credibility and distinction of awards season in a distilled format.

It’s the 10 films and 10 TV  series that “mark a moment in time.” It’s also one of two or three rooms of the year where being a civilian feels awkward.

It’s the only other yet-to-be-revealed voted awards of the weekend, and Cate Blanchett will make the first of her two country-of-origin appearances here. “American Hustle” made a clean sweep  — nominations in every single category. “12 Years a Slave” runs a close second in the awards voted by 80 of Australia’s filmmakers and executives.  The show airs in Australia two days later. In its third year, the Australian version of the Oscars (not the international ones given here) fall over a three day mid-week period in Sydney at the end of January. It’s summer there. Start checking kayak.com.

DVF Journey of a Dress Opening Party
Wilshire May Company Building (near LACMA), 6067 Wilshire Blvd
Diane von Furstenberg and pals toast to 40 years of the wrap dress. No arguments here on celebrating anything named “wrap”. Expect a bit of fashion week in the middle of globes weekend.

Poolside at the Langham Huntington Hotel in Pasadena

“Waiter, there’s a TCA in my Golden Globe.”

In addition to Anderson Cooper and Jeff Zucker (above, at a CNN shindig last spring) Wolf Blitzer, Piers Morgan, Sanjay Gupta, Christiane Amanpour, Nancy Grace, Newt Gingrich, and new recruits Rachel Nichols (who would likely have been somewhere freezing covering the NFL playoffs had she not left ESPN), the spectacled S.E. Cupp (formerly of MSNBC) and Morgan Spurlock (still everywhere) add spark to the perimeter of Globes weekend in the middle of the cable portion of the TCA.

Film Independent Spirit Awards Filmmaker Grant and Nominee Brunch
Boa, West Hollywood, 11:00 a.m.
This casual brunch is a warm up for the 2014 Spirit nominees who will gather in the tent on the beach on March 1, seven weeks later on the day before the Oscars. It doubles as grant-day. Film Independent hands out $75,000 to emerging filmmakers amidst above-the-line superstars from the indies over some of the top food of the weekend.

Lupita Nyong’o is the guest of honor at the new entry hosted by Jason Binn and his co-editors-in-chief, Nicole Vecchiarelli and Keith Pollack.

Everyone shows up, and this is the type of crowd you’re in. Above, Leonardo DiCaprio, Harvey Weinstein, and Meryl Streep at a recent BAFTA Awards Season Tea.

The Art of Elysium Heaven Gala
Skirball Center
It’s Linda Perry’s version of “Heaven” at the annual gala, where Steven Tyler will perform. Jeffrey Best and Brent Bolthouse produce the event, where Hayes MacArthur and Ali Larter take the 2014 “Spirit of Elysium” award. Tickets are still available at $5000/each, and tables from $15,000-$25,000.

The “friends” are Bryan Lourd, Giorgio Armani and Roberta Armani, as well as the aforementioned Anderson Cooper, who hosts. Awards season guest stars coming out include Rainn Wilson, Diane Kruger, and David Spade. Potential stage-time at the Globes awaits for J/P Haitian Relief Organization supporters Michael Douglas, Steve McQueen, and Idris Elba on Sunday, but Kyra Sedgwick has a lock — her daughter Sosie Bacon is Miss Golden Globes and will be planted on stage all night.

Three nominations for “Inside Llewyn Davis” and five for the TV side split between “The Good Wife” and “The Big Bang Theory”.

Sunday, January 12 – After the Show

Between 8:00 p.m. and 11:00 p.m., the three hours immediately following the telecast, there are over 6,000 carousers on site at the Beverly Hilton. For big parties, it’s all the same players as usual – HBO, Weinstein, InStyle, Fox, and NBCUniversal.

Fox’s joint party across the driveway in the parking lot of the old Robinson’s May building is technically “off-site” and not part of the Hilton. For the other major events, there’s no outside catering, even after serving the afternoon “lunch/dinner” at the Globes.

Anyone who needed even a quarter-inch of the hotel had to book it a year in advance. Entertainment news outlets have swiped up any remaining suites and cabanas.

This inner sanctum viewing party on the top floor flies under the radar. It’s not only heavy on cast members, it’s heavy on nominees. All of the AMC networks have nominations in the ballroom  below, and this clubby indoor/outdoor pre-game wraps up in time to hit the blockbuster bashes below. 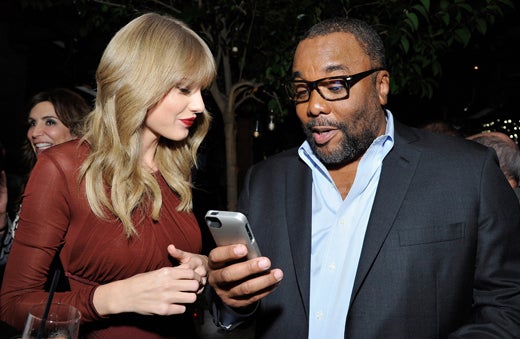 Taylor Swift and Lee Daniels at the Weinstein holiday party.

The most oh-wow of all the guest lists.

With a 2013 family of films, casts, musical contributors and surrogates from Denzel Washington to actual washingtonians like Hillary Clinton, Colin Powell, and John McCain who have on-boarded with the Weinsteins this season, I’m predicting U2, Oprah, Taylor Swift, Jane Fonda, Mandela offspring, and the usual spread of tabloid fixtures.

NBCUniversal
Roof of the parking garage

The bottle neck line to leave the lobby by the bar is headed here. Tom Ford builds the tent around the hotel’s fountain. It’s the 15th time they’ve thrown this party, this year with both returning DJ Michelle Pesce and a band. People (e.g. Sofia Vegara) dance here.

Fox
Old Robinson’s May Parking Lot
Like NBCU, this is a pan-corporate family reunion. Fox Broadcasting (the TV), Searchlight, Fox Studios, 20th TV, 20th TV International, and FX band together for the party that requires you to walk outside (gasp!) for 50 yards.

After last year’s Globes, hosts Amy and Tina kept their hosting hats on. After the Emmys, Amy and Jon Hamm made losing cool at the most sought after late-night. No word yet on what’s in store for early Monday morning atop 9200 Sunset.

As I’ve said before, on both Globes night and Oscar night most of the top tier have only one line after departing this capper: “home please.”

HBO Luxury Lounge
Saturday, January 11, Four Seasons
Heavy on HBO talent, but a few others from major shows and films turn up at the hotel that is an awards weekend hive.

Because of the value of the jewelry on hand, I can’t say where for safety. It’s a pull-suite for carpet bling, not gifting. Expect a lot of stylists and some hands-on talent making last minute pick-ups from designers like Farah Khan. Niki Ostin at PR Lab handles  the RSVP’s.

Photo Credits: Cooper/Weiner by AFI; Anderson Cooper/Zucker by David S. Holloway/CNN; NBC by Trae Patton/NBC; HBO and InStyle Atmosphere by the author, all others by Getty Images.