In this morning’s roundup of movie news ‘n’ notes from around the web, the wait has begun for the first iPhone movie … but in the meantime, we may need refrigerator magnets to decorate the summer boxoffice.

Patrick Goldstein borrows a phrase that the legendary basketball announcer Chick Hearn used to use for a game that was in the bag: “This game’s in the refrigerator!” But he’s using it to refer to the summer boxoffice, which he thinks will finish the summer the way it started, “ice cold.” Of course, Chick would NEVER say that in the first or second quarter, which is where we are when it comes to the summer movie season – and by the end of his piece, after bemoaning the lack of good original films, Goldstein admits that it’s too early to predict a boxoffice recession. In other words, as Chick would say, the jello is not jiggling quite yet. (The Big Picture)

Peter Hall takes note of a couple of interesting features in the next model of iPhone: a front-facing HD camera for one, and the in-phone iMovie video editing suite that is also becoming available. “Granted, people have shot feature films on phones before, but I don’t think anyone has shot a film in HD … from a phone and then edited it all together from that very phone,” he writes. “So the question is, how long will it be before we see just such a film (and I’m talking in theaters, not just on YouTube)?” There’s even a poll in case you want to treat his question as if it’s not strictly rhetorical; as of Monday night, the leading vote-getter, beating out “1-2 Years,” “2 Years” and “8 months,” was “Never, Beepers are Making a Comeback.” (Cinematical) 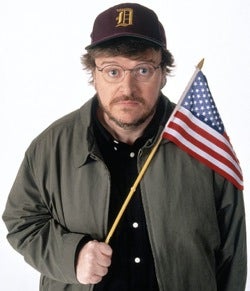 Tom Roston, who covers documentaries for the Doc Soup column, lists “the 10 most powerful people in the documentary world” for POV. To the surprise of nobody in docs, HBO’s Sheila Nevins comes in at number one, followed by the list’s sole documentary director, Michael Moore (right), and Cara Mertes of the Sundance Institute. One intriguing line: “Without intimations of repression or nuclear ability, let’s just say that if Mertes wields her power like Barack Obama, then Nevins wields hers like Kim Jong-Il.” (POV)

A film by any other name … Michael Guillen looks at the stats from the Frameline festival in San Francisco – 11 features and three shorts exhibited on film, and 205 other features and shorts in digital formats – and wonders if the phrase “film festival” has become a misnomer. He understands that a festival like Frameline, which is devoted to work aimed at the lesbian, gay, bisexual and transgender community, can’t be picky about the format in which its movies appear, but he’s worried about the semantics of it all: “Has the time come to qualify that Frameline is the world’s leading LGBT film and digital media festival? At what point is transparency required?” Info about the festival, which begins on June 17, is available at the Frameline website. (The Evening Class)

Is this any way to jump-start a stalled sequel? Shannon Cottrell has a gallery of photos from the fourth anniversary party for JapanLA, which was staged as a “walk off” in honor of the 2001 Ben Stiller comedy “Zoolander.” Derelicte and Blue Steel live … now, if only somebody can talk Stiller and Owen Wilson into bringing back the real thing. (LA Weekly)