In this morning’s roundup of Oscar news ‘n’ notes from around the web, Peter Jackson and James Cameron decide that movie technology is sort of beside the point.

The Gurus o’ Gold (or maybe the Gurus of Gold; it’s listed both ways on different parts of the website) offer Christmas-week predictions, and in the process elevate “Avatar” to the number two best-picture slot, just below “Up in the Air.” Six of the 15 Gurus (two of whom didn’t participate this week) are now picking the James Cameron film to win; six others are still sticking with “Up in the Air” for now. They (or, to be more accurate, we) also answer a batch of yes-or-no questions, finding the greatest consensus on the questin of whether “Nine” is still a legitimate best-picture contender (12-to-one against) and whether an actor, like Zoe Saldana in “Avatar,” can get legitimate awards consideration playing a role that involves motion capture (another 12-to-one no vote). (Movie City News) 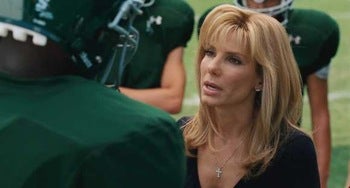 Nathaniel Rogers tries to make sense of the Sandra Bullock phenomenon, and figure out how the veteran movie star known for light romantic comedy is suddenly getting serious heat as a best-actress contender. I find that I have to agree with his conclusion: although she shows admirable restraint in “The Blind Side,” “she’s not a gifted enough dramatic actress” to make her character very interesting. “The true selling point is her indisputable star charisma, which she’s smart enough to trust to do the heavy lifting.” I think that’s why I resisted seeing her as a true contender until very recently. (Film Experience)

James Cameron and Peter Jackson talk about film technology, something the two of them know a little about. And, of course, they agree that the technology isn’t as important as the story. “The industry is in trouble,” adds Jackson, “but it has nothing to do with technology, nor is technology going to necessarily be the savior.” (Newsweek)

Scott Feinberg fills out a mock Oscar ballot, listing his 10 favorite films of the year and the achievements he’d vote for in nine other categories. “The Hurt Locker” takes his top spot, while his acting picks are Viggo Mortensen, Carey Mulligan, Christoph Waltz and Mo’Nique. (And the Winner Is … )

Brad Brevet updates his Oscar predictions, moving Meryl Streep to the top of the best-actress contenders and putting “The Hurt Locker” in first place among best-picture candidates. In a move after my own heart, he also steadfastly refuses to move Christian McKay (“Me and Orson Welles”) out of his number-five supporting-actor slot, even though he knows that maybe he should. (Rope of Silicon)

The Carpetbagger notices that the hold music on the Academy’s phone system is all Oscar-winning songs from an out-of-print Rhino Records compilation called “The Envelope Please … Academy Award Winning Songs (1934-1993).” It’s a nice idea, but that particular set substituted alternative versions when they couldn’t get the rights to the originals; it’s got a Richie Havens version of “Streets of Philadelphia,” for instance, instead of the Bruce Springsteen original, and Shirley Bassey and Doris Day instead of Barbra Streisand and Frank Sinatra. You’d think the Academy could pull some strings and get ahold of the originals … and maybe even round up some of the songs that have won since ’93. Hell, I’ll burn ‘em a CD if they want. (The New York Times)