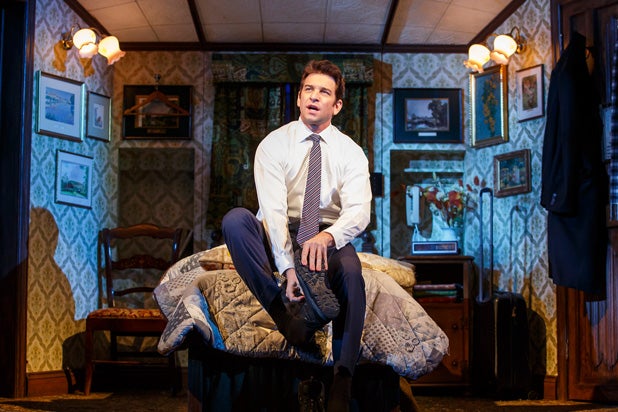 Need an antidote to the saccharine good-time, small-town vibe of “Come From Away”? You’ll find it in the inventive, acerbic, and thoroughly irreverent “Groundhog Day,” which opened Monday at the August Wilson Theatre.

Original “Groundhog Day” screenwriter Danny Rubin, with much help from songwriter Tim Minchin and director Matthew Warchus, has successfully transferred his 1993 movie comedy to the musical stage; and in the process, taken even more swipes at the vapid, rodent-obsessed inhabitants of Punxsutawney, Pennsylvania.

Minchin and Warchus, being British and Australian, might have something to do with the show’s overall anti-Americana flair. They also bring a nice Dickensian touch to the story. Like Ebenezer Scrooge, weatherman Phil Conners learns to be a human being during the course of “Groundhog Day” without ever getting overly mushy about his transformation.

The story of “Groundhog Day” plays so well on stage because it reflects the dilemma of its performers. Whereas movie actors do a few takes and are done with it, the cast of any successful musical is fated to keep repeating itself for hundreds, if not thousands, of performances. “Groundhog Day” mines that existential problem.

You can’t help but think about all that carefully honed repetition when watching the enormously gifted and seemingly tireless Andy Karl. Playing the TV weatherman doomed to keep reliving February 2, he remains center stage throughout, a feat that recalls in sheer stamina Hugh Jackman’s turn in “The Boy from Oz.” Even more amazing, Karl is as relaxed in his Joe Jock role as Jackman was preening in his impersonation of Peter Allen. Plus, Karl sings on pitch. A star is born and then reborn and reborn….

(The actor injured his knee at a preview on Friday and missed two perforrmances on Saturday, but was scheduled to return for Monday’s official opening.)

Minchin follows his “Matilda” success with his far more eclectic “Groundhog Day” score. He does a couple of very unusual things, at least for Broadway. Minchin emphasizes the rhythmic in his act-one songs, then turns very melodic for act two. He also gives his two best ballads, “Playing Nancy” and “Night Will Come,” to minor characters. Neither song furthers the plot or expands on the characterizations of the principals, but both bring a lovely contemplative mood to “Groundhog Dog” after an extremely frenetic first act.

Minchin’s lyrics are never less than clever. Sometimes, however, they are not outrageously witty when they need to be. That’s where Warchus picks up the slack to deliver the act-one showstopper “Stuck,” which finds Phil taking a couple of slackers (the very funny Andrew Call and Raymond J. Lee) on the truck ride of their life, which in any other circumstances would automatically lead to their death.

Even better is act two’s “Hope,” which finds not only Phil but the entire populace of Punxsutawney trying to off itself in ways that run the suicide gamut, from popping too many pills to electrocution by toaster in the bathtub. with help from set designer Rob Howell, Warchus achieves here what the makers of last season’s “American Psycho” musical never quite pulled off. An added attraction are a number of Act 2 stunts that can only be described as sleight-of-body and should not be revealed here.

Less effective are Minchin and Warchus’s attempts at gross-out humor having to do with bodily fluids. Seth Rogen getting an enema in the movies can be fun, but watching an actor live on stage receive the same treatment is just plain awkward.

Karl is so good that after five minutes you stop thinking about Bill Murray in the movie. You might, however, miss Andie MacDowell. Barrett Doss possesses a pretty singing voice, but emerges as a rather bland love interest.